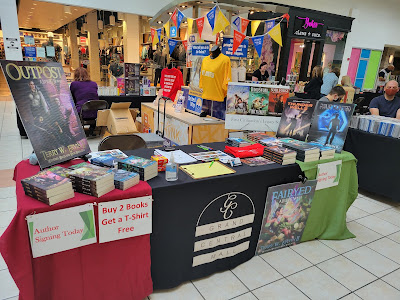 There was a lot of foot traffic at the mall, probably due to the advertising effort by Classic Plastics, but also just regular in general. The mall looked to have about 95% occupancy of all its store fronts. Compared to the malls around where I live, that is outstanding.

Although I have quite a number of events in Parkersburg, and Marietta, both very near Vienna, I only saw two regulars to events I've regularly appeared at. One normally stops to chat but isn't one who reads my works. That's okay. I enjoy discussing fantasy, SF, writing and more.

It made for an odd mix of book sales. While I almost always sell the first books in a series (Such as Outpost or Flank Hawk) far more than other books, at events where there are folks who've picked up my works before, I tend to sell more of the later books in a series. I guess if I do the event again, I may get the repeat folks. Although, in my experience, returning readers at events like arts festivals and the Pop Culture Vendor Show, have less consistent return as compared to "Comic-Con" style events.

I was a little rusty with the PayPal Card Reader and such, but quickly got back into the swing. And, for those curious, about 1/3 paid cash. The rest via credit or debit.

Fortunately, I keep all of my signing gear together and organized in the crates and boxes. Makes prepping for events less of a hassle and less likely to forget something. Below is everything loaded on my two carts--which I have learned to dual maneuver pretty well. 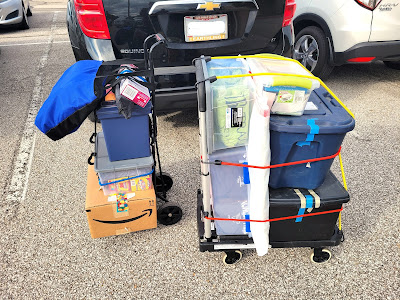 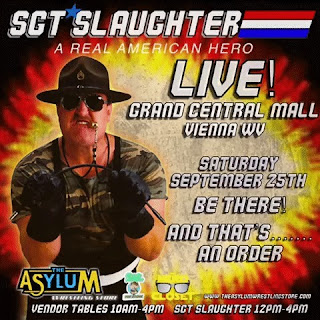 I'll be at the Classic Plastics Pop Culture Vendor Show!

I'll be there with a host of other vendors and authors, talking Fantasy and SF and signing copies of my novels.

If you're in the area, I hope to see you there!

It's Official. On the Ballot for Re-Election to Village Council

The letter from the Board of Elections arrived today: 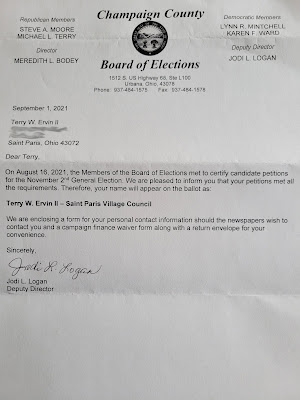 Monsters, Maces and Magic: Date is now available as an Audiobook 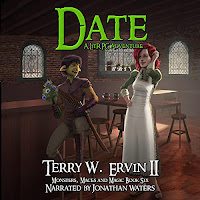 Monsters, Maces and Magic: Date is now available in audio. It's narrated by the awesome Jonathan Waters!

Check it out (links below):

Date on Audible
Date at iTunes
Date on Amazon

I was interviewed on the Dueling Ogres Podcast (a return visit)!

Check it out via the links below and don't hesitate to share. We discuss a variety of topics, from my books and writing and publication to the potential disaster of self-driving cars and more.

Really, it's available pretty any podcast app or distributor.

Typed "The End" to Revived's first draft last night (well, technically at about 20 minutes after midnight--so today). It came in at 123,447 words. Longer than anticipated. Based on the outline, I originally figured it'd end at about 110,000 words.

My publisher (Gryphonwood Press) notified me the other day that Date's audiobook version was uploaded for publication. Expect about another week or so before it's available. 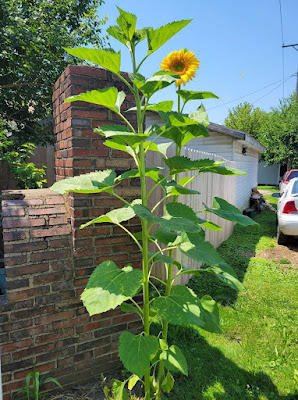 The sunflowers got planted a little later than expected due to frosts in the spring. Originally, in this spot I planted three, but our cat decided only two were necessary. This is the first bloom of the summer. 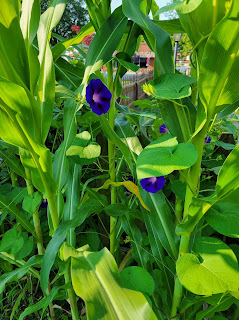 Some purple morning glories among the stalks of glass gem corn. There are a few pink blooms about as well. Once you plant morning glories, expect to have them forever.