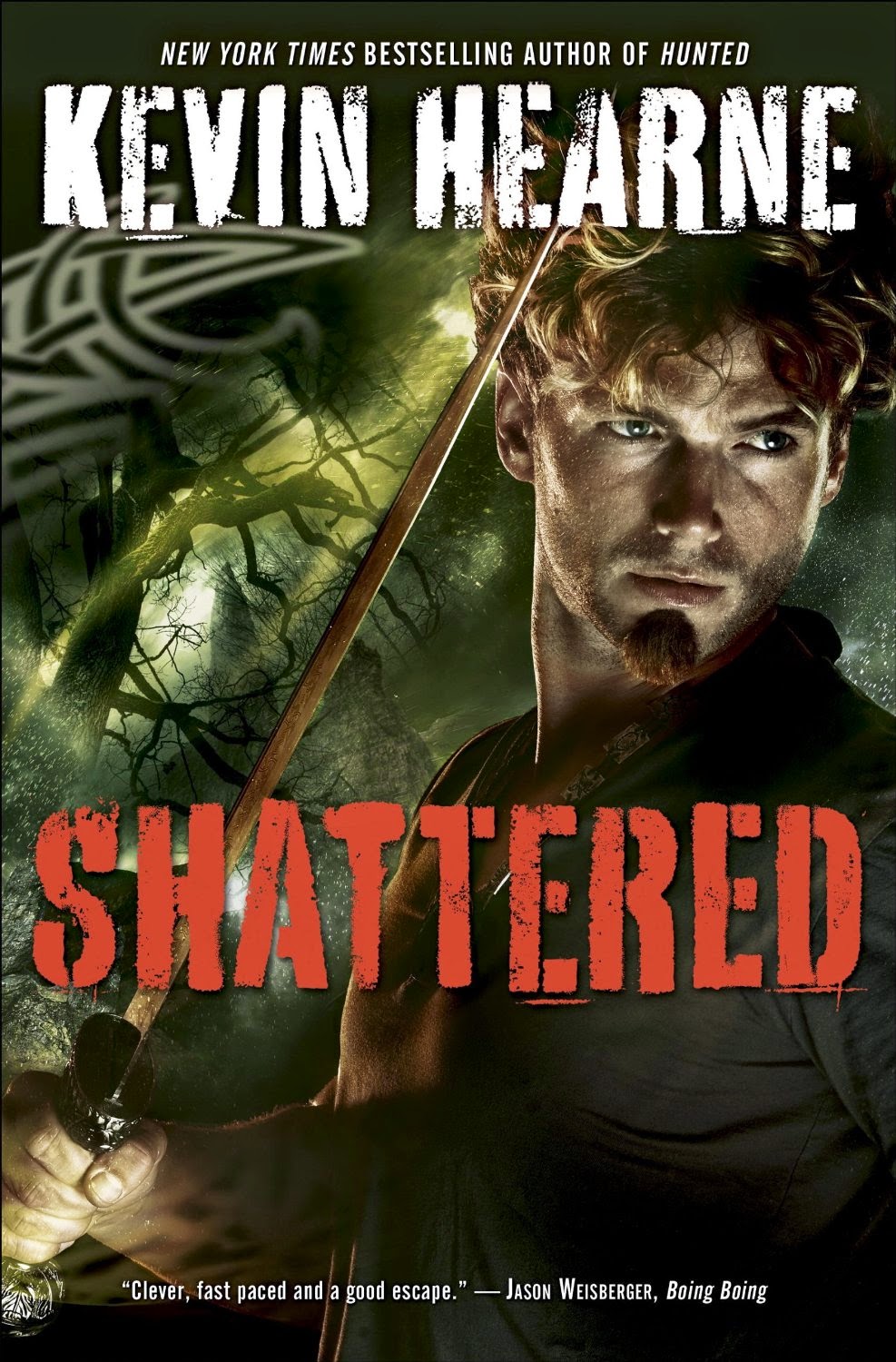 `
Those of you who've followed me for a while probably know that I really enjoy the Iron Druid Chronicles by Kevin Hearne.

The next installment, Shattered, is due out June 17th. I already have the print and audiobook versions pre-ordered. In any case, I can't urge you enough to give the series a try, especially if you enjoy fantasy--great action, characters, dialogue and humor formed into a superb overarching plotline. That said, each novel has its own complete and satisfying storyline.

So you might guess what I'll be doing, at least part of the 17th.

Note: pre-ordering, when the option is available, is a good thing for authors. It positively affects print runs and placement in bookstores and online.

`
The owner of Smashwords, an ebook vendor, weighs in on the struggle between Hatchette and Amazon, including what's at stake for each of those companies, other publishers (large and small), self-publishing authors, and  readers.

An interesting article with some decent insight. Even so, Smashwords does have an interest in this struggle and its outcome, which may slightly taint the perspective offered. Still, the points made in the article are straightforward enough for all to see.


I short time back I got this key chain for my wife (who's named her Camaro Serenity) and the key chain now hangs from the rear view mirror. Pretty neat.

And, of course, her license plate holder has Wash's famous quote: "I'm a leaf on the wind, watch how I soar."
Posted by Terry W. Ervin II at 5:28 PM 2 comments:

I see this reflected in a number of my students...

`
Food for thought: What the Internet is Doing to Our Brains

`
Some of you may find this amusing--I know my students do. My daughters do as well, sort of. 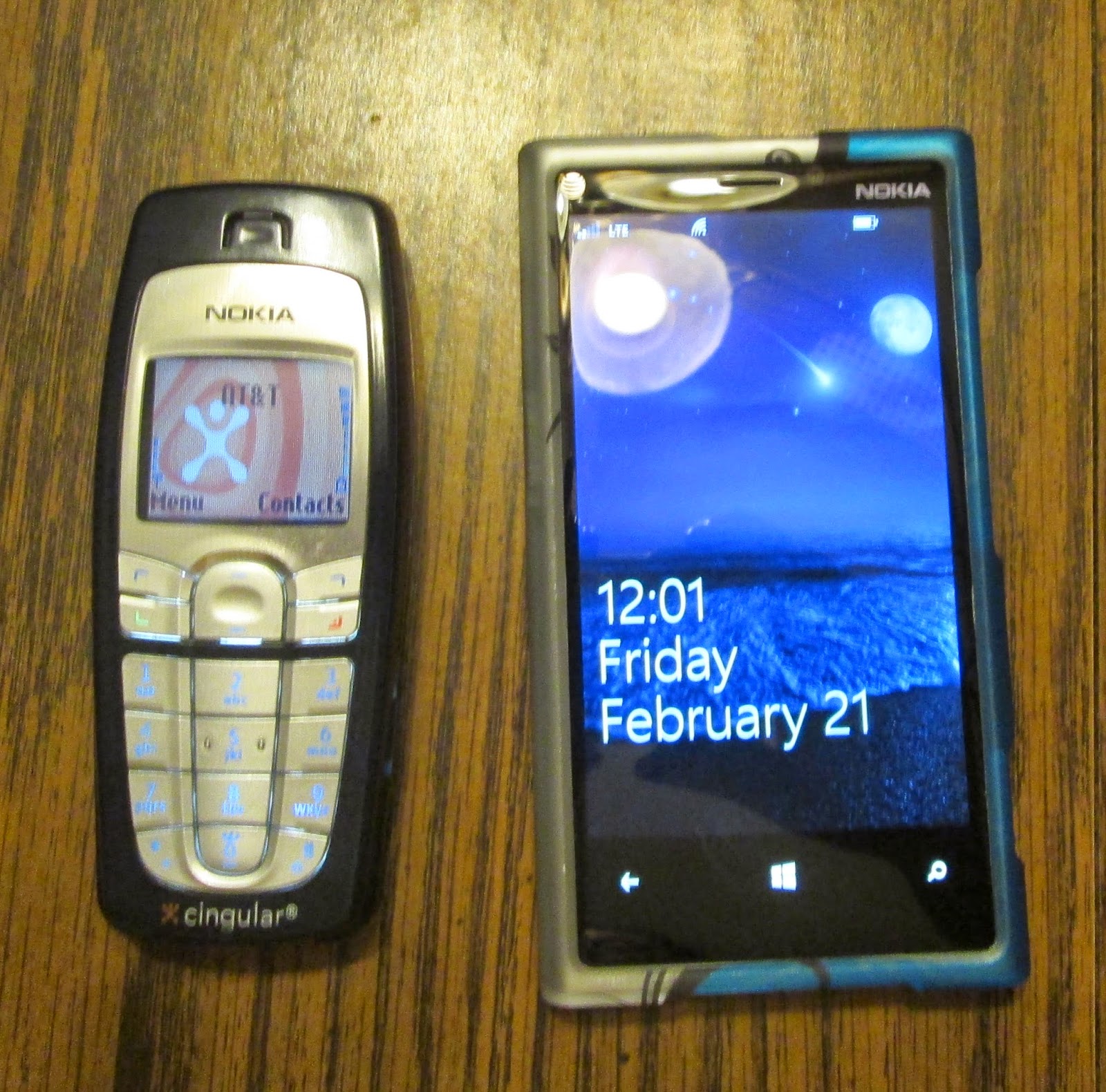 The picture to the left contains two cell phones. Mine, the 'archaic' one on the left still functions. It does what I need, mostly, although texting I pretty much don't do because it's more of a pain than it's worth. The other phone a new one my wife got in February (I think  her Nokia is her third upgrade, maybe fourth, since I got my old Nokia).

Eleven years and counting. When it dies, or the battery won't hold a charge, or I accidentally break it, I'll replace my old Nokia with a more modern phone. It's outlived two belt-clip cases already.

In the realm of cell phones, it's not a Neanderthal. The would be more along the lines of a telegraph line. And it's better than my previous cell phone, which I retired when it would no longer function. Okay a little story.

When I took my previous phone in for an upgrade, back in 2003, the cell phone store clerk offered to transfer my data (phone #s and such) to the my new phone.

He insisted, saying, "Please, allow me. It wouldn't be a problem.

I was getting ready to go, and he insisted again, so my wife said, "Terry, go get your old phone."

So, I went out to my truck and brought in my old cell phone and set it on the counter.

The clerk called over his shoulder to co-worker in the back, "Hey, Joe, c'mon out here. You've got to see this." While waiting for the co-worker, the clerk said while pointing to my old cell phone, "You're right, Sir, this is analog. I can't transfer your numbers."

I smiled, while my wife certainly struggled to contain a bout of laughter, while packing up my old phone.

I am predicting an similar occurrence when I finally turn in the my current cell phone. As long as it still works and does what's needed (it even gets reception in places where my daughter's smart phone doesn't), no need to replace it.

So, maybe there is a small measure of Security Specialist Keesay--I'm a relic tech in training.

Maybe someday I'll go down the basement, and pull my old cell phone off the shelf, and take a picture of it to post here at Up Around the Corner.
`
Posted by Terry W. Ervin II at 9:02 PM No comments:

A Message Bearing Truth (as I see it)


This was shared by my supervisor...

Security Specialist Keesay (of Relic Tech), who relies on late 20th Century technology in a mid 22nd Century world, would agree with this, although he's no where near as poetic. 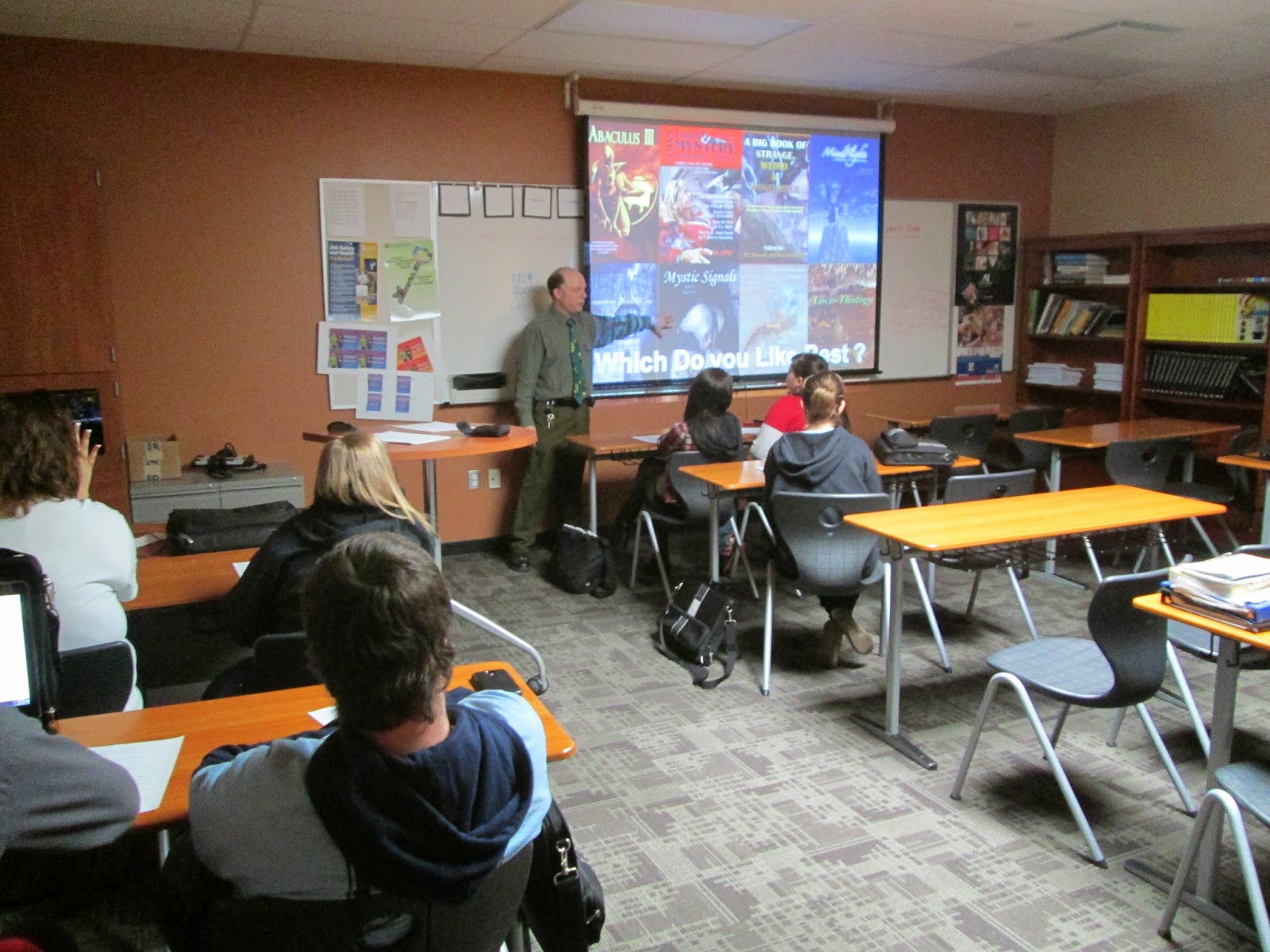 I had the opportunity to speak to a high school class (12th graders) studying Illustrator and Photoshop as part of their career track (Digital Design and Print Technologies or Information Technologies).

Based upon my experience as an author, and supplemented by their instructor's knowledge (Mr. Ralph Ash), I presented information on cover development, design and layout, including the process of working with an artist. I also discussed opportunities for further developing skills to layout/format for both print and ebooks. 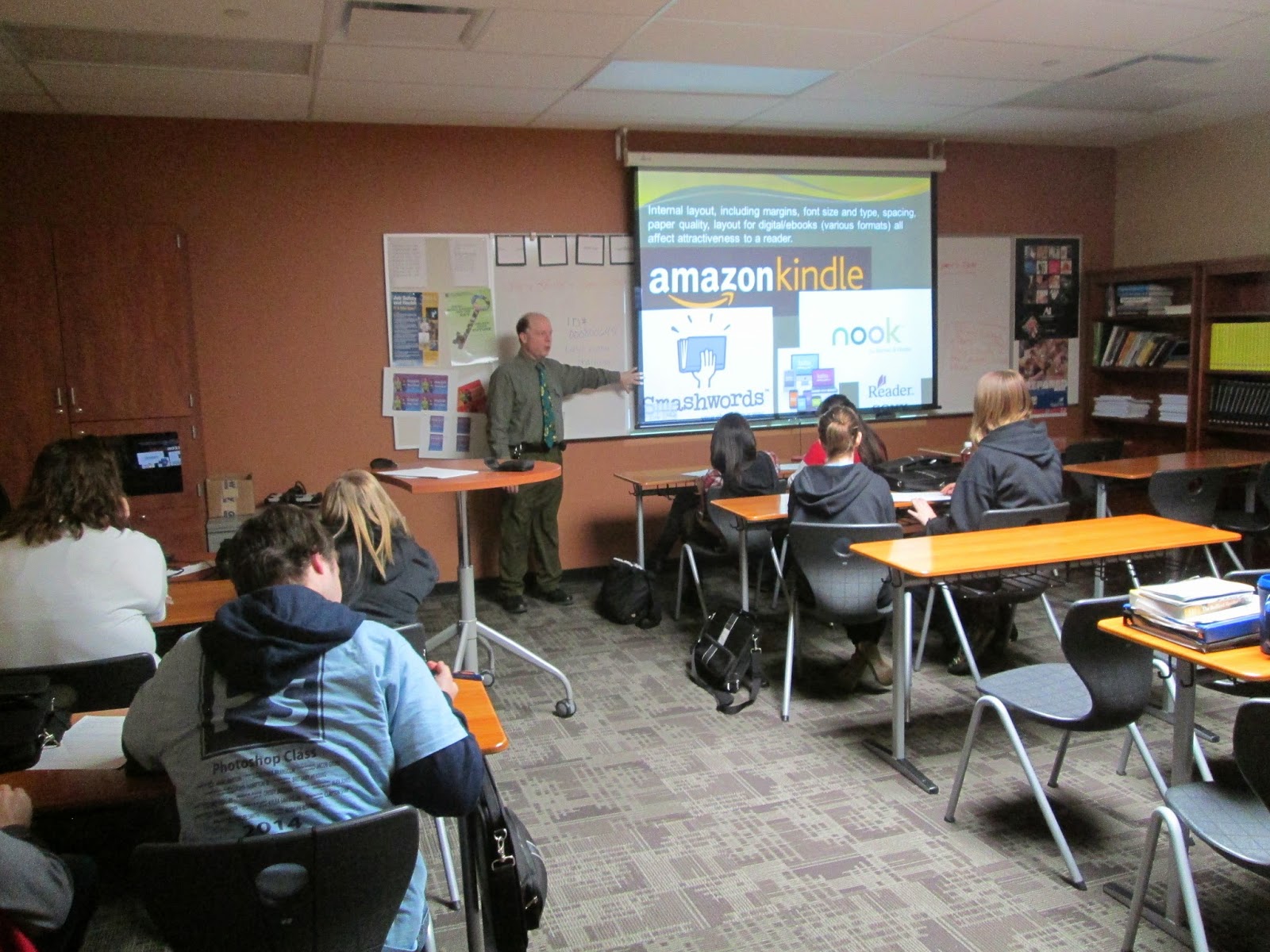 A good discussion about the potential opportunities of working for publishers and/or self-publishing authors was a topic of interest.

2014 Ohioana Book Festival and Reception at the Governor's Mansion

'
I was once again honored to have been invited to participate at the Ohioana Book Festival, and had a wonderful time meeting readers, authors, librarians (who are also readers) and participating on the fantasy/SF panel. The reception that followed at the Governor's Mansion was once again a real treat.

Below are some pictures with captions: 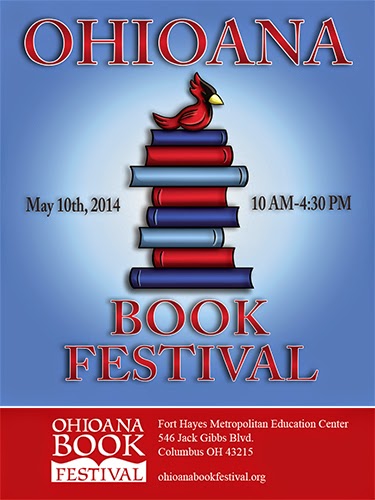 The Ohioana Book Festival is tomorrow, Saturday May 10, from 10 a.m. to 4:30 p.m. at Fort Hayes Metropolitan Education Center.  It will be a fun-filled day to celebrate reading and writing, and much more.

The Book Festival is free and open to the public.

For the most complete information about everything happening at the festival – schedule of events, participating authors, children’s activities, food trucks, directions, map – please visit this link:
http://www.ohioanabookfestival.org/
I hope to see you there!
Posted by Terry W. Ervin II at 5:32 PM No comments:

`
I have an idea for an alien invasion of Earth novel that's been rattling around in my head for a while. The first chapter is written and some notes in rest in a file, and I have a general idea not only where the story will start but where it'll go. But there are pieces of the plot that need filling in. This process sometimes takes me a while.

For example, how could mankind fight back? How could they threaten alien spacecraft in orbit above Earth? Nuclear missiles? Maybe not so much. Without the atmosphere to carry the shock wave, the damaging effect of nuclear blasts are much diminished. Plus, how easy would it be for an advanced technology alien species to target and destroy a missile, approaching a spacecraft?

What about lasers? Again, atmospheric-driven diminished effectiveness. And any aircraft rising 30,000 to70,000 feet to eliminate atmospheric degradation would be very vulnerable to attack, even with decoys accompanying it--if any and all could be built and launched. And a lot of power generation would be needed...? Probably not a viable option.

Then, I remembered a clip I'd seen on a show on the Discovery Channel a few  years back. It discussed Thunder Wells. That sounded promising. So a little research and there it is. A limited yet potentially effective way humanity might strike.

In essence, a Thunder Well requires a long shaft drilled into the ground, the shaft filled with water, which is instantly heated/vaporized upon detonation of a nuclear device at the bottom of the shaft. If the shaft is plugged with a metal projectile (shot out by the immense steam pressure) that could survive traveling 40+ miles per second through the atmosphere until it reaches space...and strike an orbiting ship...

Targeting might be a problem, along with a few other issues...but it has potential.

Thus, one gap in the plotline filled.  Only a few more to go.
`