`
Note: This is a reprint of the Character Interview when Bound was released in Australia. 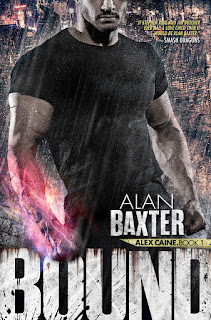 Mr. Hood, could you tell the readers a little about yourself, including your business?

Certainly. I run a company called Black Diamond Incorporated. We are an investment and acquisitions firm. I’m sure you’re more interested in the less mundane acquisitions side of my activities. Well, let’s just say that I seek arcana that the magical community might be prepared to pay very well for and I sell it to them. If they can afford it.

In general, Mr. Hood, could you describe some of your clients? And isn’t it dangerous to deal both with arcana and individuals in the magical community, especially those with access to magical powers and wealth?

Well, I know few people who control greater wealth than I do, and therein lies my ultimate power. My clients are many and varied, but confidentiality prevents me from telling you anything about them. Suffice to say that I can meet their many and varied needs well. Everything good in life can be dangerous, but that’s half the fun, no?

Understanding that client confidentiality is of vital importance to your business, might you be able to name and describe an example or two of the arcane items that you’ve obtained and/or sold through Black Diamond Incorporated?

There’s really very little I don’t sell through Black Diamond. If someone wants something, I’ll get it for them. I have people out there in the world who are experts at finding things. A lot of magical grimoires pass through our hands – people are always after that powerful tome. You know, the one that will make them more powerful than they ever dreamed. Very few such things exist, of course, but that doesn’t stop my business from making a good turnover on the desire. Ancient god icons tend to attract a lot of bidding too, but we usually source those for specific clients. The truth is, if it’s rare, and especially if it’s magical, we can get it for you. If you can afford it.

Can you describe a situation where one of your competitors did something foolish or unwise that cost them dearly and allowed Black Diamond Incorporated to profit?

Ah, well, you see, the problem with that question is the assumption that I have competitors. No one does what I do. Sure, there are various arcane dealers out there, but they trade in trinkets compared to me. And should they get their hands on anything of real value, I’ll soon relieve them of it and turn a proper profit on the thing. The most foolish and unwise thing any person can do is think they have any chance at competing with my company.

“Relieve them of it” is quite a loaded answer. Correct me if I am wrong, but what you’re indirectly relaying is that underhanded actions, which might be an understatement, or hiring someone outside the company structure to perform such actions, are part of your business model?

Business is business. My business is successful because I get what I want. We live in the jungle, we’re still animals. Don’t mistake this concrete and glass for anything other than a variation on the trees and vines of the wilds. Survival of the fittest. I will always make a viable business offer for anything, but believe me when I say that I get what I want. Nothing “underhanded”, of course, and yes, I have many outside subcontractors on my payroll.

Mr. Hood, as you view humanity as a form of animal, and actions animals take to survive and prosper aren’t generally classified as ‘underhanded’ in the animal kingdom, would it be accurate to say you’re a firm believer in ‘The ends justifies the means’?

Most certainly. The strong survive and the weak are subjugated. There’s no point in complaining about it. The only response is to become stronger, become the apex predator. Many people try to moralize all kinds of other positions, but the simple truth is that the strongest survive by feeding on the rest. That’s the end that justifies the means of existence throughout the animal kingdom. Man likes to think he’s more evolved, but look at the news any day of the week and you’ll see the truth.

Keeping with the animal theme, humans are animals that form relationships and communities. Who would you consider part of your social circle, be it family, friends, associates, subordinates, or others? What part do they play in your life?

I have many people in my social circle, from the purely business-related to rather more personal liaisons. But there’s no one I couldn’t do without. Reliance on anyone is a weakness. To continue your analogy with animals (or was it mine?) the greatest hunters hunt alone. Some work in packs, but the truly apex predator is solo.

What do you think of the Kin, and what sort of contact or business interaction do you have with them—if any?

They are what they are. Usually I have very little to do with them, but if they come to me for business, I will offer them the same service I would extend to anyone else. But in my experience, they tend to keep to themselves. Which is probably best for everyone.

From the following, in your experience, which type of client is the most risky to deal with and which would be your preference to deal with when they’re seeking an item that might notably enhance their power? And, if you could, provide some insight as to why

1. An accomplished conjurer preparing to bite off more than he can chew
2. Someone else in your sales and acquisitions business, not necessarily one with magical abilities but is knowledgeable
3. A Kin in a leadership position within their culture
4. A skilled witch that’s part of a powerful coven
5. A demon garbed in (or possessing) a mortal body

Ah, well now we get into the nitty gritty of the business! I’ll address each of your queries in turn. Number one is likely to be a once-only client, as people in that position tend not to survive a brush with the truly powerful items. Number two I would never deal with. One doesn’t fraternize with the enemy. Number three is usually represented by someone. A Kin leader coming directly to me is usually up to no good within his or her own Den. And let me tell you, I find that kind of internecine warfare quite delicious. Number four I’ve learned to be very wary of and deal in open and honest terms. Seriously, it is foolish to cross a powerful witch. Number five is unlikely to come to me and I don’t know if I’d recognize them for what they are if they did. And I certainly wouldn’t tell you.

Might you relay how you came to be aware of the magical community and provide your view on why it remains an unknown to the vast majority of humanity?

The thing about this world is that people only see what hey want to see. Very few people really want to know anything beyond their job, three meals a day and a roof over their heads. Anything that doesn’t fit the paradigm gets filtered out. Other people, very few and far between, do want to know more. The true seekers, the adventurers, and they will discover the wonders that are out there to be found. It’s also in the interests of those people not to publicize too much the wonderful world they know. There’s value in exclusivity, after all. And power. And I’m here to help facilitate that power to those who know and can afford it.

Mr. Hood, as we are closing in on the end of this interview, is there anything you’d like to add or say to the readers here?

Simply that if anyone out there requires the rarest of arcane treasures, then I’m the man you need to see. And if you can’t find me, you’re clearly not cut out to be my client.

Thank you, Mr. Hood, for taking the time from your business to answer questions for the readers.

Where Bound is Available:


About the Author, Alan Baxter: 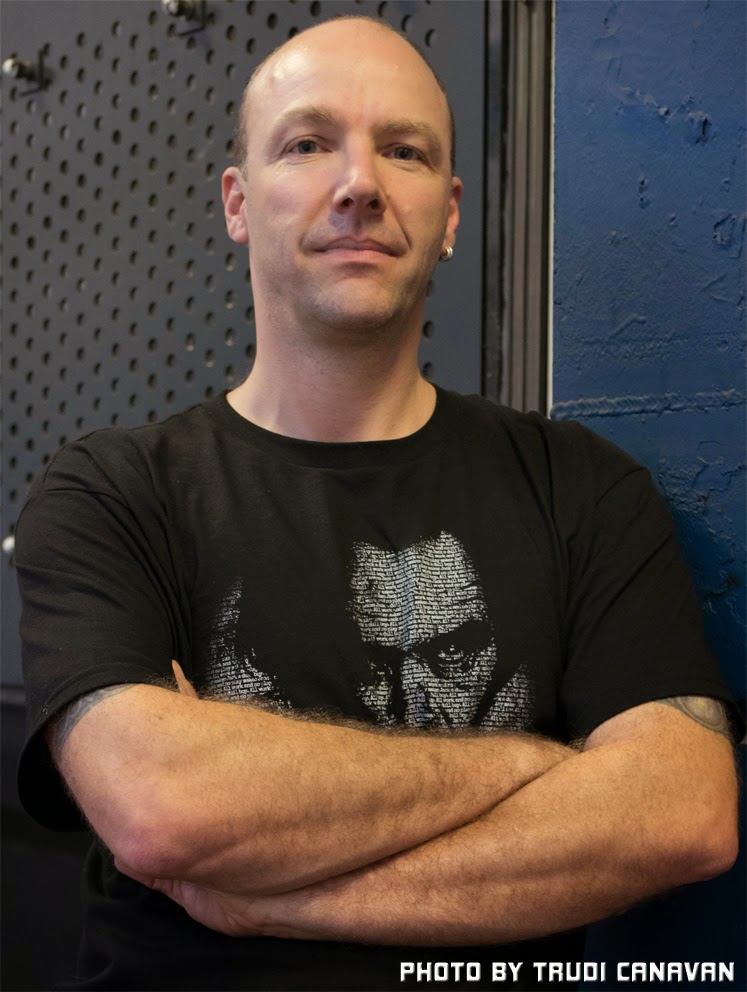 Alan Baxter is a Ditmar Award-nominated British-Australian author. He writes dark fantasy, horror and sci-fi, rides a motorcycle and loves his dog. He also teaches Kung Fu. He is the author of the dark urban fantasy trilogy, Bound, Obsidian and Abduction (The Alex Caine Series) published by HarperVoyager Australia, and the dark urban fantasy duology, RealmShift and MageSign (The Balance Book 1 and Book 2) from Gryphonwood Press. He co-authored the short horror novel, Dark Rite, with David Wood. Alan also writes short stories with more than 50 published in a variety of journals and anthologies in Australia, the US, the UK and France. His short fiction has appeared in Fantasy & Science Fiction, Beneath Ceaseless Skies, Daily Science Fiction, Postscripts, Wily Writers and Midnight Echo, among many others, and more than twenty anthologies, including the Year’s Best Australian Fantasy & Horror (2010 and 2012). Alan also writes narrative arcs and dialogue for videogames. He wrote the popular writer’s resource, Write The Fight Right, a short ebook about writing convincing fight scenes.


Alan lives among dairy paddocks on the beautiful south coast of NSW, Australia, with his wife, son, dog and cat. Read extracts from his novels, a novella and short stories at his website – www.warriorscribe.com – or find him on Twitter @AlanBaxter and Facebook, and feel free to tell him what you think. About anything.
`
Posted by Terry W. Ervin II at 4:47 PM No comments:

Where Thunder Wells is Available 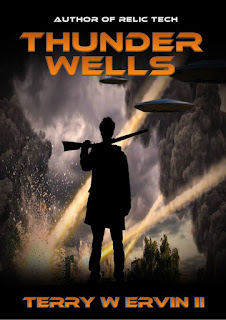 Thunder Wells is to be released December 12!

Additional Ebook distributors and Print Editions will be added as they come online/become available.

Book Signing at Christmas in the Village (of St. Paris)

I'll be talking about writing, fantasy and SF, and signing copies of my books for readers at Christmas in the Village.