My daughter's cat, Romeo, passed away today. Cancer took him after 13 years spent as a loyal pet. Genevieve showed him exceptional care and understanding in his final weeks and days, and Romeo very much accepted and enjoyed it all. Maybe even more than the love and care he experienced over the 13 years.

Romeo started out as a stray and took up residence in our garage. Young and thin, he was overjoyed to have a family and people that cared for him. Initially Romeo was pushed around by the many cats in the neighborhood but, as he grew and became healthy, he established himself as a cat not to be messed with. He had a favorite ninja move: Face the adversary, then jump forward, high in the air while performing a 180 degree spin, landing on the back of the adversary. Insert tearing claws. It always ended the fight with the other cat fleeing, pretty much never to invade Romeo's territory again.

Romeo's sidekick, Swirly, wasn't as successful as a protector of territory. When the neighborhood cats (and there are many) approached and weren't impressed with Swirliams, Romeo just had to go and sit and stare...

While he was pretty much a bad-ass cat, he was a good fella too. He loved his treats and tuna, playing with his bird toys, and to be petted. He meowed in a variety of ways to let you know he was hungry. The loudest purring cat I've ever heard when sitting next to Gen, or anybody. Like a happy, content motorboat. And his nemesis, Penny (one of our dogs), they  eventually learned to tolerate each other...

Really, Romeo was a fun cat (and I am not exactly a cat person). A lot of people say they have (or had) the best cat ever. On that point, I would strongly disagree.

Romeo is now in Heaven, hanging out with his sidekick, Swirly, and his second side kick, Specter.

A great deal. Icefall, part of the bestselling Dane Maddock Adventures (by David Wood) is now free on through most ebook sources. It's a book that works as both a standalone and introduction to the Dane Maddock, Bones Bonebrake, and their adventures--think Indiana Jones but starring two former Navy SEALs.

Actually, it's my favorite book featuring Dane Maddock, except for Cavern, which I co-authored with David.

Give it a try...it's a quick, action-packed read, and it's free.

And, if you haven't read Cavern, consider giving it a try as well. :)

Most Recent Review of Flank Hawk 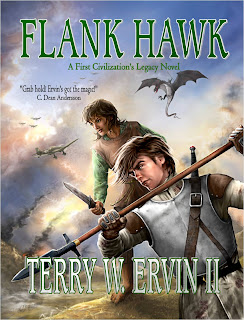 Here's Flank Hawk's most recent review on Amazon--some pretty neat authors in which to be grouped!

"I have read Tolkien, Goodkind, Donaldson, and McKiernan. Irvin (II) has stood toe to toe with their work, and in+my opinion delivered an equal tale.Flank Hawk lays out a tale of fantasy, of a future yet to be made, and a tapestry of alZ the sword and sorcery familiars mixed with historical machines of death.The characters are breathing, and the treatment of the yarn they weave will have you enraptured.I'm sure you will not regret the read.Very well done!Now on to the next book.😊"--Bookworm Forever