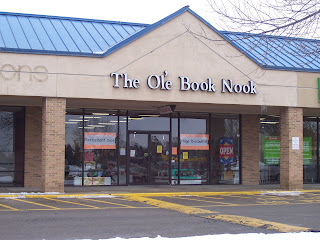 The Ole Book Nook was the closest bookstore to my home, being about 15 miles away (east). The next nearest is about 25 miles to southwest and the next nearest is about 30 miles northeast. Even the 'local' malls no longer have a chain bookstore.
The owner, Vicki, is a very nice lady and interesting to talk to. A lot of bookstore knowledge coupled with understanding of readers goes with her into retirement. She tried to find a buyer and had some interest, but nothing came through. Tough economic times, especially for brick & mortar bookstores.
While Flank Hawk certainly wasn't a best seller at The Ole Book Nook, sales averaged almost one copy a month. I guess that means with the store closed, a dozen fewer readers in 2011 will stumble across Flank Hawk, (and Blood Sword--when I finally get it finished--squeezed in 500 words tonight). Will just have to find another way to reach them.
Posted by Terry W. Ervin II at 6:06 AM 2 comments:

`
I got word last week that my short story "Seconds of Eternity" accepted by Aberrant Dreams will not be published. The story was released as the managing editor is (and has been) struggling with health problems. The ezine and print anthology may return. I've enjoyed most of the stories Aberrant Dreams has published over the years, and hope some day to read more.

Also, today, I received a polite rejection from Dark Discoveries: "Sorry it has taken so long to get back to you. Submissions increased tremendously in 2009 with the announcement of our pro rates. Thank you for letting us see "The Candy Bar Game," but we are going to pass on it. It's very good, the characters are compelling and likable, the suspense is there, but it's really more of a straight mystery/suspense story than a horror story. Hope you find it a home, though!"

I'd submitted it as suspense/horror and thought the story contained horror elements, but not enough for Dark Discoveries.

I have the next market for "Seconds to Eternity" already selected. Just have to finish up the cover letter. Will have to check my notes for "The Candy Bar Game" and maybe adjust to more mystery/suspense oriented magazines.
Posted by Terry W. Ervin II at 7:10 PM 5 comments:

A memory: A Pail of Air by Fritz Leiber

There are three stories from my youth--I cannot really even remember exactly when, maybe 5th or 6th grade--but they really stuck with me and sparked my interest in science fiction. One of them is "A Pail of Air" by Fritz Leiber.

To be truthful, until today I hadn't re-read it since all those years ago, and some of the details had gone fuzzy, but I remembered the young boy going out to get the frozen oxygen to keep the fire going in the huddled shelter his father had built. And the girl he spotted on one of his ventures to obtain a pail of air. And to be truthful, I occasionally recalled it when I'd w 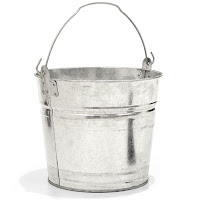 atch a show that discussed brown dwarfs or dark stars.

I won't say much more. It truly is a classic SF short story. If you're the least bit interested, give it a read and let me know your thoughts. Do you remember it from your past? What did you think of it then and/or what do you think of it now?
A Pail of Air by Fritz Leiber
Posted by Terry W. Ervin II at 6:36 AM 2 comments:

For NFL fans out there (and especially Packer fans) this short clip, although slightly dated, I strongly suspect will bring a smile to your face--if not a good laugh.

Is there anyone out there that doesn't see this as a problem?

Will the the politicians have the competency and courage to do what it takes to confront and address this problem?

Will the citizens support them?
Posted by Terry W. Ervin II at 9:40 AM 6 comments:

Rainbow in the Snow...Lots of Snow 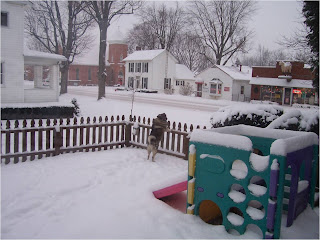 It seems that the Winter of 2010-11, thus far, has offered more than the usual fare of snow--at least as reported by my brother-in-law in Georgia and my brother stationed in Germany. It hasn't totally missed us here in Ohio either.
Rainbow Crystal, our Norwegian Elkhound (pictured), certainly doesn't mind lots of snow.
Posted by Terry W. Ervin II at 3:30 PM 4 comments: 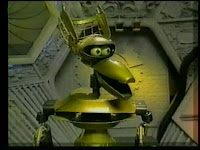 MST3K is a very funny show. If you've never had the chance to view an episode or two, you really should.
For some odd reason a quote from one of the robots (Crow) has stuck with me over the years--I know, sort of sad. Anyway, here it is:
“Life is like a crap sandwich. The more bread you have, the less crap you gotta take.” --Crow T. Robot
I am sure there are more uncouth versions of the quote out there but, in any case, do you think there is some truth to what Crow said?
Posted by Terry W. Ervin II at 5:26 AM 3 comments:

Two Titles Completed from my To Be Read Stack: Iron Coffins and The Fix

The two titles that I read during my Christmas Break are Iron Coffins: A Personal Account of the German U-Boat Battles of World War II and Burn Notice: The Fix.
The rest of my literary time was spent working on lessons for One Second After, some reading/editing for MindFlights, critting for Elysian Fields and, of course, writing Blood Sword, sequel to Flank Hawk.
' 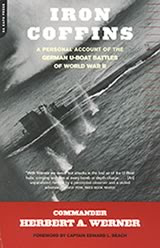 Iron Coffins was a gift from my brother. I've read a number of WW II naval accounts, one about submarines but from a U.S. Commander's POV years ago. This one was from Commander Herbert A. Werner (the author's) perspective. He does an excellent job portraying the dangers, struggles, successes, and ultimate doom of the German U-Boat fleet through his firsthand account.
Those who've studied the history of WW II will recognized the advances of allied forces as well as the breaking of the German codes, and how that worked to decimate the German Wolfpacks.
A very interesting and enlightening read in many levels. Reading it, I even found myself hoping for Werner's success in sinking Allied shipping--an odd occurrence, to be sure. But that can be considered a measure indicating how well-written the narrative of his experiences on the U-Boats was.
Anyone who enjoys tales or the history of World War II, or ever saw and enjoyed the film, Das Boot (The Boat), would enjoy this read. 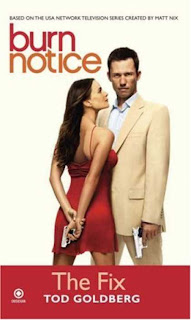 The other novel I read was The Fix, originally a gift from me to my wife. The Fix is more than a novelized version of an episode (because it isn't) and stands well on its own. However, fans of the Burn Notice series, especially those who like Sam Axe, will gain more insight into his sources and a bit more on the sometimes animosity between he and Fiona. There is more sexual tension between Michael and Fiona than is often portrayed in the series, and the action occurs along the lines of events of the first season or so.

It's well worth picking up and reading, even if you've never seen an episode of Burn Notice but like well-written action and mystery.
Posted by Terry W. Ervin II at 8:26 AM 2 comments: Thank You to everyone who has visited Up Around the Corner and especially to those who took the time to comment.

Wishing you a Wonderful, Safe and Healthy 2011, and may at least a few of your dreams be attained.