Late to the Game: The Guild

`
More often than not, it seems like I'm late to the game when it comes to some really neat things. For example, I didn't see the first episode of Firefly until it'd already been cancelled. A most recent example is my discovery of The Guild while clicking through recommendations on Netflix--looking for something to sort of listen to/watch, while grading mundane fill in the blank, short answer questions.

What is The Guild?  It's a series that focuses on a group of online fantasy role players, all of which are offbeat, odd, quirky and entertaining as all get out. It's witty, funny, fast paced, great dialogue and character interaction, with the story moving from short episode to short episode. If you don't laugh at what sometimes appears to be an oncoming train wreck of humorous turmoil...I don't know what to say if you don't. Your sense of humor is just different than mine.


Here's a peak of the first episode that introduces the main characters...some of the language and such isn't rated G.

Anyway, the show has been around for a while. I just missed it. Maybe because I watch much less TV (less time to write if I do). Give the show a try...Netflix, DVD, Youtube, etc.

More info can be found here: The Guild

Wordsower in Liberia, a Country Struggling against Ebola

I've posted several times about Wordsower. A friend and former co-worker, Kim Smith, has been working in Liberia for over a decade, working hard to help the people there and to spread the word of Christ. His emails and the Wordsower ministry reports are always interesting.

I asked Kim for permission to share some of what he wrote last week, briefly about his travels in Liberia and into Monrovia, a city where the Ebolia epidemic is having a devastating effect.

In any case here's Kim in his own words:


I just returned from 16 days off our main base in Zwedru.  The first stop was in Gbarnga where we have established a new base, and then I went onto Monrovia, Liberia’s capital, to pick up supplies.  The trip from Zwedru to Monrovia, about 300 miles, is not easy!  Because of the Ebola crisis the army has put up a checkpoint at a bridge that crosses a major river.  Only humanitarian organizations and transport trucks with commodities are allowed to pass through.  Very few organizations are traveling out of our county into Monrovia, the Ebola capital of the world.  Our Lord allowed me to a find a free ride with an international organization going to Monrovia.  The road is very bad!  Several times we were stuck and had to use 4 wheel drive and a wench to pull us through the mud holes.


Gbarnga is an Ebola hotspot.  Many are infected and have died in this city.  I stayed a week there and helped, DK, our base leader to strengthen our new base.  I then traveled to Monrovia to get supplies.  While there our Lord found us 4,200 Bibles.  Truly, we were only able to get them through His miraculous provision!  He also allowed us to get 70 cases of paper enough to print 350,000 pages of Bible training material.  Again, the hand of our Lord was on us.  I was able to pick up a tub of essential press supplies that were brought by plane through another missionary coming to Liberia.


Doctors Without Borders has established a huge Ebola camp in Monrovia.  They have many big tents for patients.  I was allowed to enter.  I am sure it was because I was a white man, there are very few in this country.  It was unreal!  It was like I had walked onto a futuristic movie set.  Almost everyone was covered head-to- toe in anti-virus suits.  I was not allowed to take pictures.  The camp was overfilled.  I was told patients were lying on the floors because all the beds were full.  While I was there I saw 3 ambulances waiting in line, for over an hour, to enter.  When I left they were still waiting.


One day, while in Monrovia, I was walking and a bus made an unscheduled stop to pick me up.  When I entered the driver said, “No charge”, and emptied the front seat for me.  He said that God had told him to pick me up and give me a free ride.  We talked and exchanged numbers.  Later I met him at the church he had started.  He has a small independent church and has started several other churches in the past.  He wants more training and training material so he can continue planting churches.  Praise God that is what we do.  Again, our Lord has united us with another that has a similar calling; the calling of seeing a church in every village of Liberia so that every Liberian can walk small and find a church.

The trip back was also the working of God.  Another international organization that has been contracted by the USA to build Ebola camps gave me a lift to Zwedru, free.  It took us two days to travel 300 miles. Bad road!

Check out our Wordsowers' new web page – www.wordsowerliberia.com and Kim's blog: wordsowerliberia-kim.blogspot.com, where you can see pictures, videos and learn more.

Donations (100% goes to the people and ministry) can be sent to:
Wordsower International
16960 Sidney Plattsville Rd.
Sidney, Ohio  45356

`
Gryphonwood Press is running promotion through Booksends for Flank Hawk. 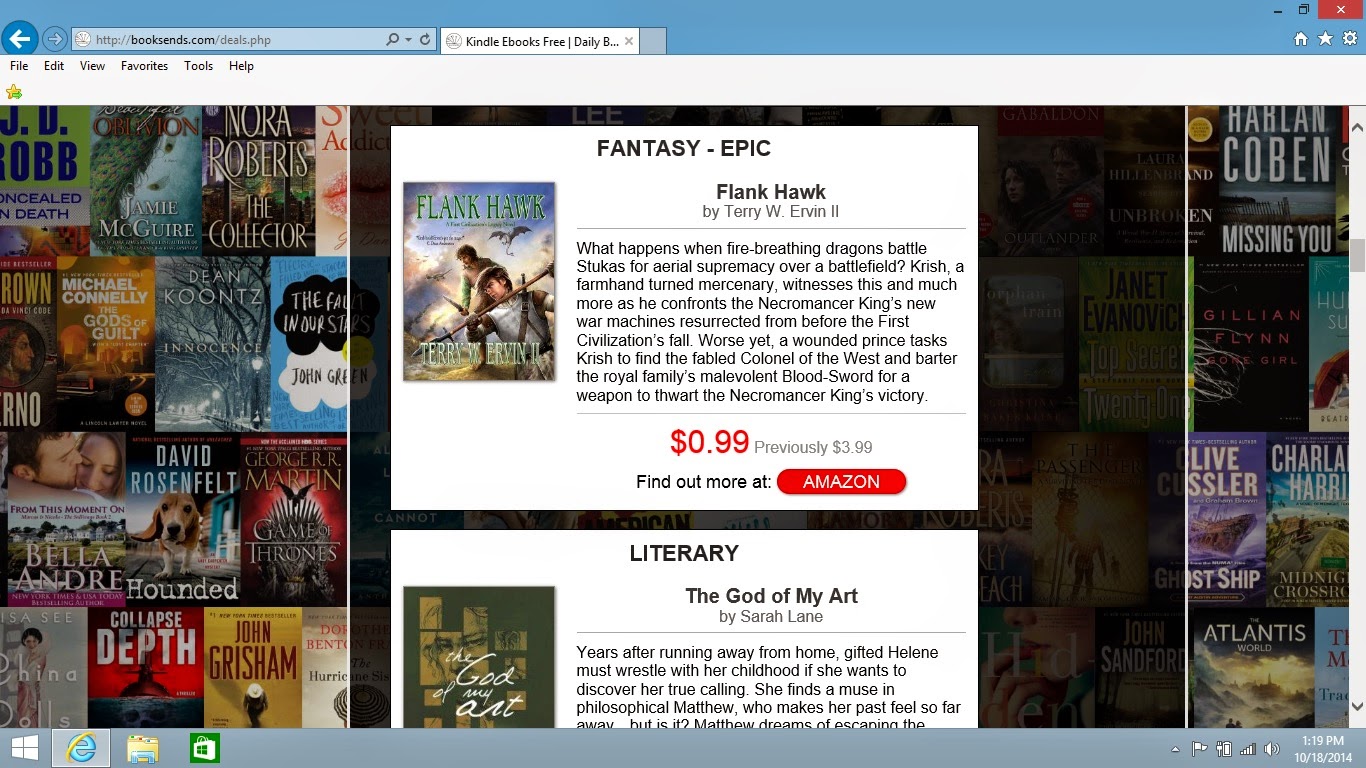 If you're inclined, take advantage of the temporarily reduced price, use the direct links on the left (scroll down a little), or follow this link: Flank Hawk on Sale: Now Through this Weekend
`
Posted by Terry W. Ervin II at 1:47 PM No comments:

Flank Hawk on Sale: Now Through this Weekend

Gryphonwood Press has reduced the ebook price of Flank Hawk, the first novel in the First Civilization's Series to 99¢.

The reduced price ebook version is available via: 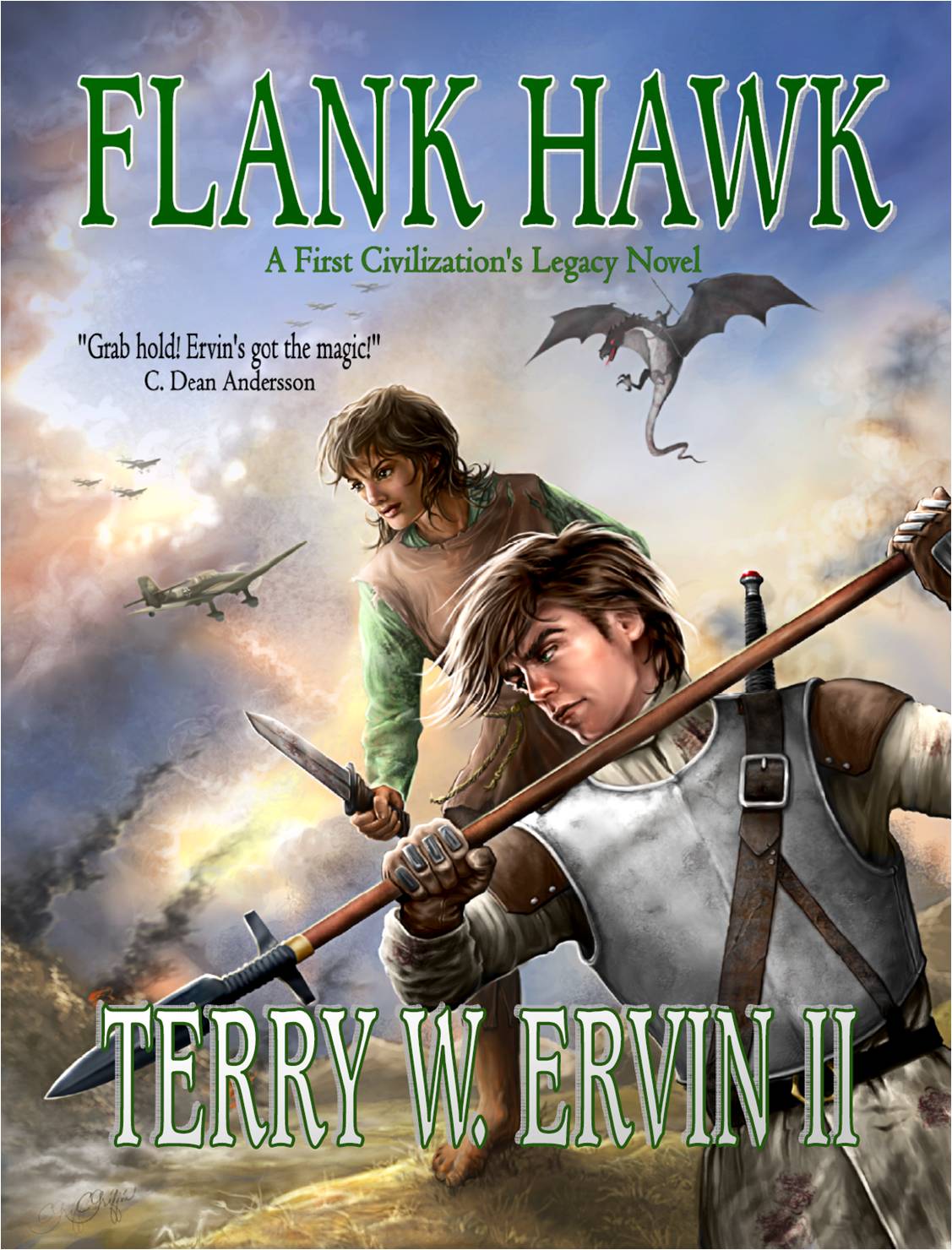 Flank Hawk at Amazon Kindle US (and other Amazon outlets including UK, Canada, Australia, France, Germany and more).

Three Topics of Reading: Or What I'm Reading and Listening to at the Moment

Fitting in reading is always challenging for a writer, at least as one busy as me. But I think it's important. What would an engineer that designs automobiles say? "I don't have time to drive cars around on occasion, I'm too busy designing and building one."

Right now in ebook I'm reading: Assassin's Curse by Debra L Martin and David W. Small. It's a new series and authors for me. I'm about 45% through and while the storyline is predictable in some ways, in others it's turned out pretty twisty and interesting to read.

In print book I'm reading: Hawk by Steven Brust. This is his latest release in the Vlad Taltos series. I'm not very far along as I only have read the first 45 pages yesterday evening. It's a good start with action and a problem (or several) for Vlad, and I enjoy Vlad and his adventures, along with the regular recurring characters--especially Kragar, who, from the description, is supposed to play a decent role.

This is the 14th book in the Vlad Taltos series, with a number of other books written in the same world. Not the best to start off with, but all are available in ebook, print and audiobook. There were a couple in the series that were average reads, but those are compared to others written by Brust, who writes pretty darn well.

In audiobook, I'm listening to What's So Great about Christianity by Dinesh D'Souza and narrated by Jeff Riggenbach, Actually it's a 're-listening' as I've read it several times and this would be my third listen. Right, I re-listen to books often, especially when driving in my truck to work or elsewhere--and sometimes with my wife and family in my wife's Camaro. This book is a challenging read and listen. It makes you think and ponder--at least it does me. Each time through I remember what was discussed and get a little better grasp of the content.

`
My application to attend ConCarolinas 2015 as an Author Guest has been accepted and confirmed. I'm very much looking forward to the event, panels, and meeting readers.

I'll post more details, such as panels and additional guests, when they become available.

Here's the link if you desire more information about the times, location and guests to date: ConCarolinas 2015
`
Posted by Terry W. Ervin II at 5:38 AM 2 comments:

`
Here's a bit of advice for writers just starting, beginning to chase down that dream:

"Write fast so you can outrun your doubts and insecurities."--David Wood, Author of the Dane Maddock Adventures

This is What Often Slows this Writer Down

`
Readers often ask what takes me so long to write another book.

Being an English Instructor, this is what I often face over the weekend. It discounts what I grade during the week, plus planning and all of the other tasks, including new State Mandated paperwork that does absolutely nothing to benefit students (but that's a whole nother post).

Plus, serving as a member of the Village Council means I have a packet to review this weekend for Monday's meeting, and e-course work. And some family activities and church.

But, you know what? I'll still hammer out some words and get closer to my work in progress being finished and released.

So, no complaints on my end. Just sharing a bit of what keeps me from writing those novel adventures readers are asking about (yes, pun intended).

Besides, from my understanding, my publisher is waiting...in that, as an author, I am very fortunate.
`
Posted by Terry W. Ervin II at 9:47 AM 2 comments: 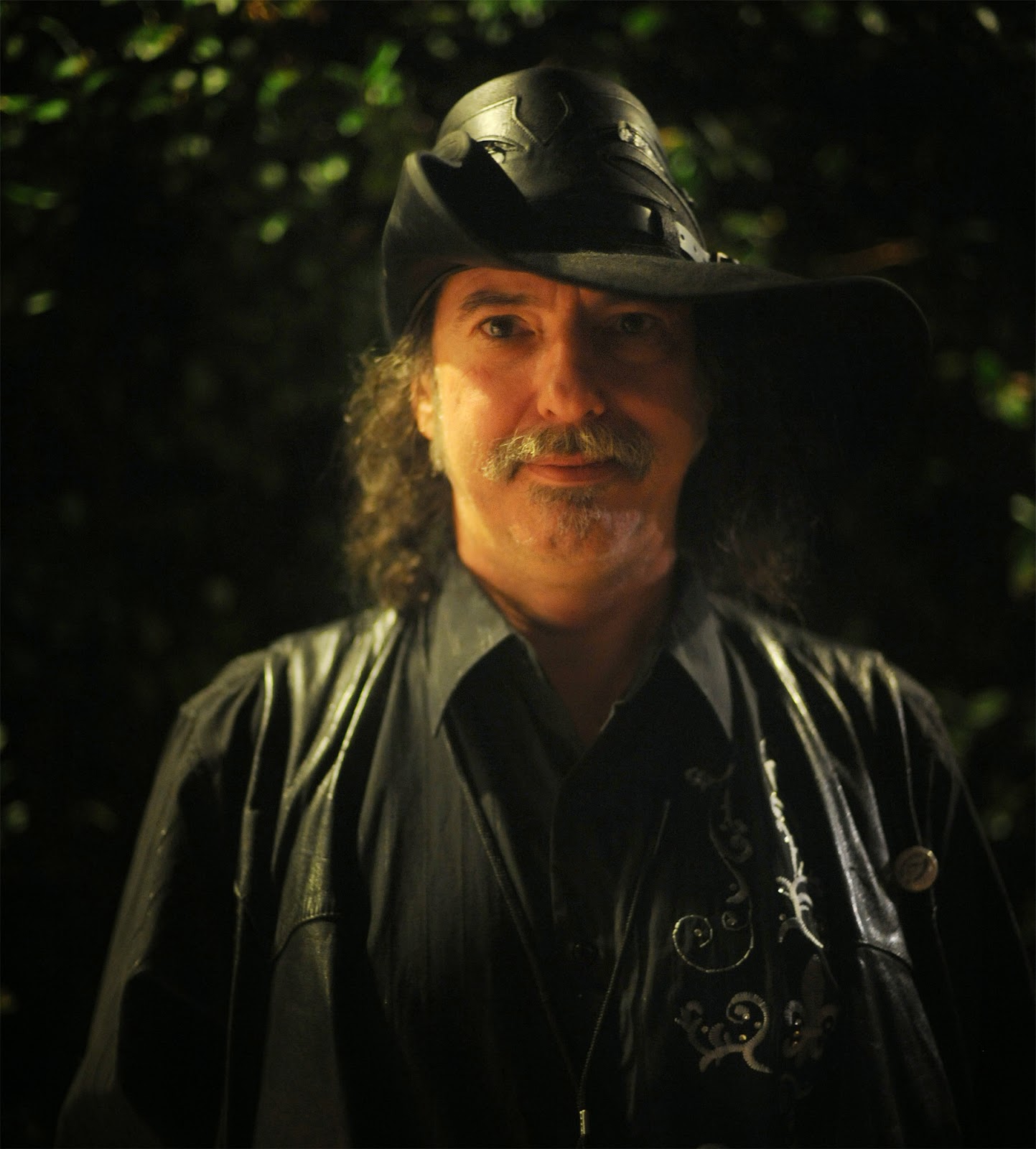 "Every once in while, a person will do something obvious and direct that is no more than it appears to be. I think they do it to throw you off." --Steven Brust