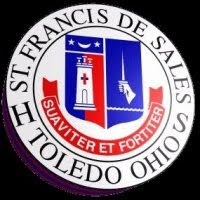 Tomorrow I will be traveling to St. Francis de Sales High School in Toledo to discuss writing with students during their English classes.

I graduated from SFS many years ago and it will be interesting to walk the halls once again.
Posted by Terry W. Ervin II at 7:30 PM 3 comments: 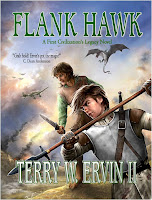 Positive reviews do make a difference, just as tags and lists (Listmanias) do. They help bring Flank Hawk to the attention of potential readers. They help a reader decide if Flank Hawk might be something they'd like to give a try.

-
It's gotta be hard to view this and not at least crack a smile.

Labels: Abbot and Costello, Humor, Two Tens for a Five

Awesome Authors I met at the Book Lover's Festival

A couple of questions to start with:

Who do you happen to sit down next to during breakfast or lunch at a writer's convention or festival? This, at least, a writer often has some ability to control.

With assigned seating during signings, which writer is placed to your right and to your left?

Who do you sit next to or connect with when on a discussion panel?

Sometimes I am fortunate. I say this because in my experience over 95% of the authors I've met are really nice people--willing to talk, share experiences and, when possible, direct readers your way. Other times I am very fortunate. At the most recent event, I feel as if I fell into in the 'very fortunate' category.

Here are just a few of the folks I met: 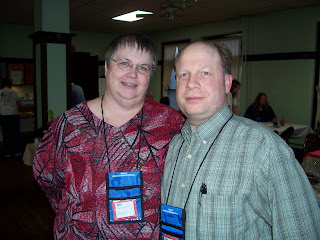 Elizabeth Vaughan sat to my left during the book signing session. I'd overheard during conversation earlier in the day that she was from my home town of Toledo and we connected even before the signing! And we both enjoyed the Bloodsong series by C. Dean Andersson (the author who's blurb is on the front of Flank Hawk). Elizabeth writes romance fantasy, with some great titles out there--a new one slated for release in April 2011.
.
. 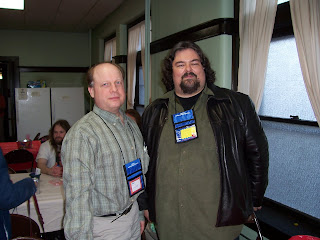 I met Stephen Zimmer during a panel discussion on Fantasy/SF and Horror. He's an energetic and interesting guy with some cool fantasy titles out. He's going to be at ConCarolinas 2011 so I'll be sure to see that we cross paths again.
. 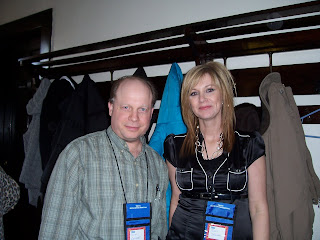 Bonnie Stewart sat to my right during the book signing. She's sharp and engaging and knows more than a bit about writing and publishing. If you like horror, especially Southern Gothic, check out her works. You won't be disappointed. 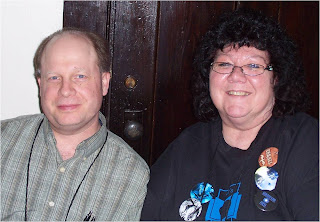 I had a great time at the 2011 Troy Book Lover's Festival this past weekend. Sold some books, met some great readers along with some pretty darn awesome writers.
Sue, owner of Around About Books (see picture top right of Sue and me), hosted the event and did a wonderful job. Friday evening and all day Saturday were filled with events, from a Spring Hat Contest and drawings for gift baskets, to discussion panels and book signings. And of course, there was plenty of good food and great conversation about books, stories, reading, writing and authors.
I was honored to be one of the panel authors discussing SF/Fantasy and Horror with attendees.
I'll post here about some of the writers I met over the next week or so and the panel on publishing presented by three small press owners (as time permits). I'll definitely be attending the Book Lover's Festival next year--and whether you're a reader or writer--or both, you should plan on it too! 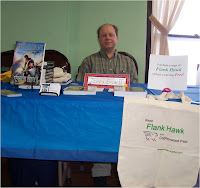 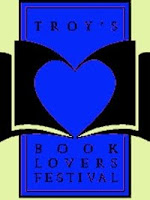 I will be one of many authors participating in the Troy's Book Lovers Festival (in Troy, Ohio) on Friday, March 11th and Saturday, March 12th.
See the link for more information on location and events/times.
Link: Troy's Book Lover's Festival, Hosted by Around About Books
Hope to see you there!
-
Posted by Terry W. Ervin II at 6:15 AM 4 comments:

You might guess from this being my second post on the topic (Deficit Spending by the U.S. Government) that it is a great concern of mine.

The U.S. Government in February 2011 posted the largest monthly deficit ever: 223 Billion dollars. That's in 28 days!

For additional perspective, consider that last year the U.S. Government paid (or maybe racked up would be a better way to state it) 207 Billion dollars on the National Debt. What will happen this year, with a significantly larger debt, and with interest rates set to rise from currently historic lows?

Now, look at Congress, debating and going nowhere about the current fiscal year's budget (the previous House of Representatives proposed or voted on a budget before the most recent election so we're working off of a series of continuing resolutions). As things stand, the House of Representatives (controlled by the Republicans) propose roughly $60 Billion in cuts. The Senate (controlled by the Democrats) propose about $5 Billion in cuts, claiming the Republican cuts are too extreme. WHAT?

Is there a disconnect here? Isn't there a 'Run-away Spending Train' not only racing toward a cliff, but picking speed along the way? The whole time the 'political engineers' in charge are bickering about what minuscule fraction of resistance should be placed on the brakes. 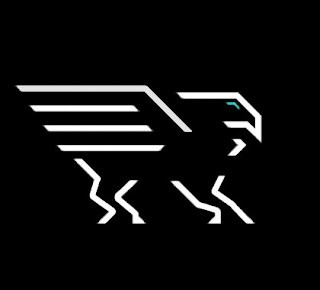 It's Read an Ebook Week at Smashwords, and all Gryphonwood novels (including Flank Hawk) are 50% off.

Smashwords offers just about any format you could want, including .mobi for Kindle readers and .epub for Nook, Kobo, etc... Just choose the books you want, and enter RAE50 at checkout to get your 50% discount.