`
I've been invited again this year to participate in the Art Affair on the Square, to be held in Urbana, Ohio on July 19th.

I will be one of a half dozen authors, invited by the Champaign County Library to represent the Literary Arts at the event.

Hopefully the weather will be more cooperative this year. Last year offered heavy and extended thunderstorms that ran through the middle of the day's events.

Participating as a Panelist

`
If you have a moment, check out my guest post over at Myself as Written where I discuss how to prepare for and what to expect while participating as a (literary) panelist.

Review of Relic Tech at Two Ends of the Pen

Click on over and see what they had to say that earned its good rating:

Audible.com is one of the main outlets for the audiobook versions of my novels with Genre Shotgun, my short story collection, in production and should be released later this Spring.

One of the features on Amazon, which owns Audible, is the novel ranking feature. Audible has this feature as well, but it's not listed next to titles and has to be searched for...by selecting the category of an audiobook, selecting 'All Best Sellers' in that category and clicking through page by page.

Titles can also be searched by author, narrator, and publisher to determine their rank within that category.

I was curious and decided to take the time necessary to discover that as of Friday, March 21st:

If you might be interested, the links to my works, in their various formats, can be found along the left column of my blog.
`

`
Those who follow my writing probably know that with Soul Forge submitted to my publisher for editing, I've focused on writing the sequel to Relic Tech.

One of the things that helps keep me focused as I move forward is a novel's title. Normally it stays the same from beginning to end for both short stories and novels...except for Flank Hawk and "Seconds of Eternity."

In any case, the second installment in the Crax War Chronicles will be titled Relic Track, unless something better or more appropriate is struck upon. My concern is that the working title of the second novel may be too similar to the original.

An important aspect with respect to titles is branding (and the cover design/art) and having a title that hints at the contents. Also, it seems with my novels, two word titles are it, so to speak.
`
Posted by Terry W. Ervin II at 8:54 AM No comments:

`
For those who follow such things, if your novel or audiobook gets placed on the 'also bought' listings below a popular title, it offers visibility, which translates to potential readers/listeners having the opportunity to notice and consider a reading/listening to a novel that they otherwise my never have come across.

It's advertising that can't be bought, but is worth a lot with respect to visibility. Relic Tech, the ebook version did very well with this on Amazon's Kindle, although it has faded from the first page of  'also bought' thumbnail listings. However, the audiobook version of Relic Tech has caught on and is appearing on the 'also bought' listing for a number of popular titles.

How does one's works appear in the 'also bought' listing? There is very little an author/publisher can do, other than to write a darn good novel and do whatever can be done to provide an initial kick start upon publication. Then, it's up to the readers--their preferences, and if your novel tends to match those preferences as demonstrated through similar purchases. Thus, there's some timing and promotional efforts that can be done by the author and publisher, but really it's the Amazon/Audible algorithms and reader/listener preferences, combined with some luck, that make the difference.

I believe a good cover and title can help too. Maybe name recognition, (but I don't think that I have that). 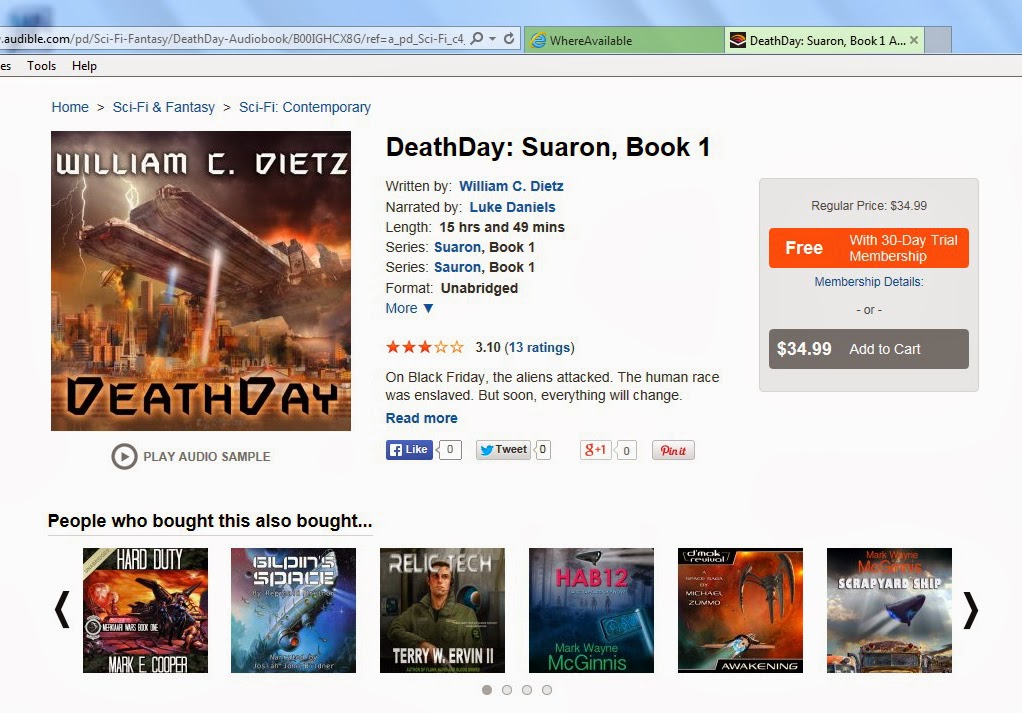 I just found it pretty interesting and cool to be paired with Luke Daniels, even if indirectly.
`
Posted by Terry W. Ervin II at 6:02 AM No comments:

The Second Novel in a Series Again

`
With Soul Forge submitted to my publisher for editing, I've begun working on the sequel to Relic Tech, the second novel in The Crax War Chronicles.

Relic Tech was the first novel I'd written. Back in 1998, I sat down and decided that I was going to
write a novel. I taught myself, basically by reading and studying other novels. I picked up a 'how to' book by Orson Scott Card, but that really only gave me the very basics. I studied storytelling, pacing, characterization and much more by reading and rereading books.

Sure, being an English teacher, I knew the had a lot of experience in novel writing theory. But reading is different than writing. Reading is sort of like driving a car whereas writing is designing and building that car. While reading, I studied how the parts of other cars were designed and built, and how it all came together. I compared and contrasted different authors and their novels and their techniques, and applied what I learned to my own writing style and stories.

After I finished Relic Tech, I outlined the next novel in the series and wrote the first two chapters or so (after sending out Relic Tech to publishers). After the first two chapters and outline, I put those files away...actually I didn't open them up until two weeks ago--they hadn't been touched since 2003. I remembered a lot, but not everything, and I'm glad I did that the outline and first chapters. It's given me a running start.

Something to remember: Since then I've written another novel (Flank Hawk, which is actually my first novel that found a publisher) and two sequels to it (Blood Sword and Soul Forge) and about a dozen short stories. That also means I've learned a lot about writing, especially as I'd spent a year studying and learning how to write a sequel (detailed here: Writing a Sequel).

So, as I am working to get the sequel to Relic Tech under way--still figuring on that working title, as there's a lot that goes into a title--I am having to revise, which is proving both interesting and a bit slower than I'd like.

Still, I am making progress, and progress is a major part of the battle.
`
Posted by Terry W. Ervin II at 11:14 PM No comments:

Flank Hawk and the Writing Process

`
Author Kim Smith posted my article on writing over at her blog.

If you've got a minute or two, click on over.

Link: Flank Hawk and the Writing Process
`
Posted by Terry W. Ervin II at 7:11 AM No comments:

Thougths Opposite of what I Wrote about in "Accelerated Justice"

`
This morning I was answering a couple of questions for the narrator who is producing the audiobook form of my short story collection (Genre Shotgun). The narrator's questions focused on the story "Accelerated Justice" where the main character gets wrongfully caught up in a near-future criminal justice system. In the story, artificially ageing those convicted is the accepted route to serving the sentence for their crime.

This morning I also came across this article, which takes an opposite perspective on the issue:

Could we condemn criminals to suffer for hundreds of years? Biotechnology could let us extend convicts' lives 'indefinitely'

Both my story and this article touch upon the issues concerning the purpose and the cost of punishments given to those convicted of crimes and, indirectly, what it says about us and a society that fosters such attitudes and beliefs.

`
Today was my second opportunity to speak to the government classes at the Upper Valley Career Center, where I work. My objective was to bring to life something that is only theoretical and seemingly distant to the 17 and 18 year olds. Sure, it's local government, but it's not something they tend to interact with, except possibly mayor's court after receiving a speeding or traffic violation ticket.

I can't say that every student was captivated by my discussion supplemented with a PowerPoint presentation. But most were interested, and filling out the question sheets provided by their teachers. Also, more than a few interesting and insightful questions were asked by the students.

While talking about and relaying my experience as a member of the St. Paris Village Council kept me out of my classroom where I teach English, a fair number of those that attended my presentation were my students, and were afforded the opportunity to see me in a different light, wearing a different hat. Yes, I was still 'teaching' but the subject matter was a bit different.

I look forward to being invited to present to a whole new set of classes next year. We'll see what happens.
`

I Just Thought this was Kind of Humorous

`
A couple of my students mentioned this video to me, and said it was really funny (and clean).

For those of you who've read Relic Tech, one of the secondary characters, Security Specialist Kent O'Vorely, did get training that was a little better than this ;)

Hope you enjoy it.

Soul Forge: Sent to My Publisher for Edits

`
Today I finished the 4th draft of Soul Forge, the anticipated third novel in my First Civilization's Legacy Series and emailed the file to my publisher. It's now in line to be edited.

The novel ended up much the same length as both Flank Hawk and Blood Sword, about 128,000 words. I guess that says something about tales I write in that setting.

If things fall into place, including the editing, cover art, blurbs, etc., Soul Forge should be released by Gryphonwood Press in late May or early June.
`
Posted by Terry W. Ervin II at 7:33 PM 4 comments:


Relic Tech has been released as an audiobook, narrated by James Conlan.

Currently it can be obtained via Audible.com and Amazon.com. It should be available via iTunes shortly (I will follow up when this occurs).

I will say that James Conlan did an awesome job, and even added a few special features here and there to enhance the listening experience. 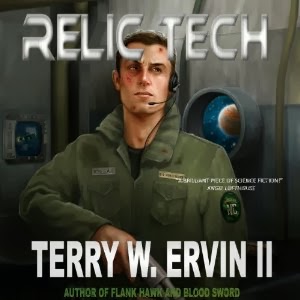