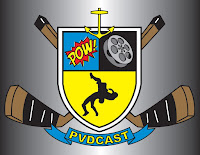 I was interviewed over at the PVDcast this week. I talk about writing, some of my works, about politics from the local level, and far more. 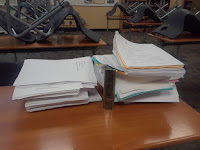 Spent more than a bit of time after school yesterday making copies of my SLO (Student Learning Objectives) pre and post tests. Pretests will be given next week. Figured why not just get the approved post test copied now so I don't have to do it in the spring.Also in the included picture is a 6 inch ruler.

Thanks state of Ohio, for the inefficient use of time and resources. In theory, this is the last year for SLOs. Wonder what brilliant mandate is next up on the agenda to take the place of SLOs?
Posted by Terry W. Ervin II at 8:31 AM No comments:

Outpost has achieved a sort of milestone for one of my works. It's earned 100 ratings on Audible. It's the first of any of my novels to reach 100 ratings/reviews on any single platform. 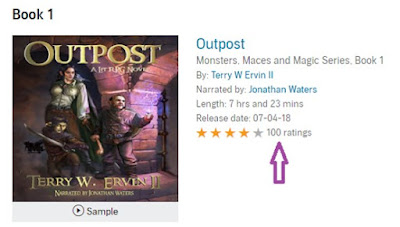 A major thumbs up to Drazenka Kimpel for the cover art and Jonathan Waters for the narration, making Outpost's success possible.

If you might be interested in checking it out, or any of my titles (in print, audio or ebook) here is an easy link: Where Available


The LitRPG Re-Roll Podcast did a review of Monsters, Maces and Magic: Outpost this week.

Click on over and see what the podcast host, Lavelle Jackson, had to say...


So, if you have been wondering at the slow rate of progress in writing Relic Shield, science fiction always takes me longer.

For example, the first major destination is a Chicher colony.  Nothing really surprising in the plot, as it's readily stated. The Umbelgarri want to establish a breeding colony there, much like the one Kra discovered during the invasion on Mavinrom, during the Crax invasion.

Anyway, the colony is on a moon, circling a planet, similar to Venus, orbiting red giant star. So, questions like the color of the sky, based on the atmosphere and the sun rays (wavelength--and how human eyes are evolved to see white, despite the shift otherwise), the complicated day and night cycle (think the rotation of the moon, but also its rotation around the planet, which would mean sunlight being blocked by the planet. Also the effect of the elliptical pattern the planet makes, in conjunction with the slightly elliptical path the moon makes around the planet...

Then there is the Chicher society. That is easier, as I have had that sketched out for years, and have thought a lot on it. But that is an added dimension, in addition to spending time around an Umbelgarri and the Bahklack thralls serving him.

Then there is the flora and fauna of the moon itself to consider...

Why does it have to be a moon? Recall that the Umbelgarri home world was a moon, whose orbit was destabilized by the Shards near the end of the Silicate War. The Umbelgarri are seeking similar conditions to their home world (moon) to increase the success rate of bringing new generations into the dwindling population (much lost in the Silicate War, and now being further devastated as the war against the Crax is going poorly. All of this was established in the previous novels...a consideration when one considers writing a series.

Then there is the interaction between the rat/squirrel-like Chicher (Relic Techs) and the Umbelgarri, low-slung amphibians, like a cross between a salamander and crocodile, who communicate mainly via shifts in color (like squids) of their skin, and low frequency sounds (like elephants) that add emphasis and emotion. Plus, they're A or Advanced Tech. I am striving to be consistent with what has previously been established, and what would be logical moving forward.

So, words come slowly at times.

There is this novel, and the final novel in the series planned, and possibly a prequel, which focuses on Kra's  participation in the Colonization Riots, and subsequent 'banishment' to warehouse duty on Pluto.