Welcome to Up Around the Corner, Courtney. Please, tell us a little about yourself and your writing. 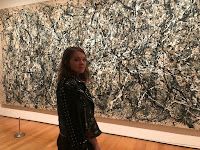 I’m Courtney, and I’m a first-time author. My novel was released this past October. I’m from Philadelphia, and I live with my fiancé and three rescue pups: Rickie, Billie, and Reggie!

Sentience is my debut novel, and it explores the ethics of AI through a re-imagined Turing Test. It's been described as genre-bending by readers, and I think that's a really accurate summation. It's obviously a science fiction novel, but there's lots of thrills, romance, and some darker elements baked in. I love anything Promethean, and it was heavily inspired by the A24 Film Ex Machina and HBO's Westworld. The novel actually started as a contemporary dance performance that was showcased in the 2017 Philadelphia Fringe Festival, and from there, I took the world that I built on the stage and transformed it into the world of Sentience. 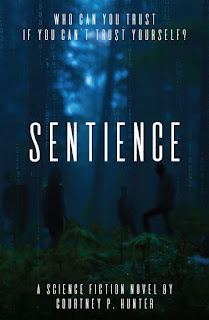 Sentience follows twenty-four individuals as they travel through a contained natural preserve to participate in a Turing Test conducted by a tech corporation willing to do anything for monetary gain. Throughout their journey, they face obstacles designed by the experiment controllers to elicit human response and emotion. However, four of these individuals are not human. Romance falls together as the world around them falls apart, revealing the lengths people will go to protect those they love, achieve success, or simply survive. While the humans involved wrestle with where they stand on the polarizing issue of artificial intelligence and its applications, the AI in the experiment must prove their humanity to leave the experiment unscathed. The experience of those within the experiment is juxtaposed against those running it, some of whom struggle with the corporation's intentions for the AI that pass the Turing Test. All of this leaves readers wondering what truly defines humanity and consciousness.

What inspired you to become a writer, and what is one of the things that surprised you most in the process?

I've always told stories and created characters in my head to entertain myself since I was a kid – during car rides, long baths, or stretches of boredom. It took me until I was around twenty-three to realize that I had a well-developed lineup of characters and story lines from all the years spent thinking.

At the same time, I've also been a dancer for the majority of my life, so I've found that there's lots of story-telling within dance, too. At twenty-three, I choreographed the piece that inspired the novel. When I was done, I felt like the world I created on the stage was the perfect backdrop to the characters and storylines rattling around in my head. I put the two together and that's how my first book, Sentience, got started. 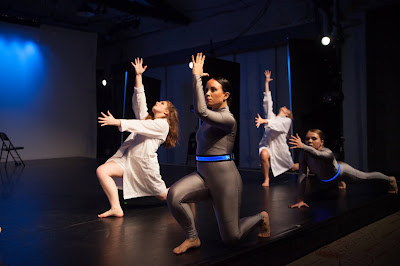 I didn't grow up knowing I wanted to be a writer; it more so just felt like the next step in my evolution as a creator. Now that I have my first novel under my belt, I am itching to write another. I spent so much time working on Sentience without realizing it, so this time around, I'm just drawing a lot of inspiration from personal experience. This way my writing feels just as authentic, even though I didn't spend years subconsciously creating the characters.

As far as surprises go, one thing I learned when I went back to read my book during the process of promoting it, I realized how much physicality there is in my writing. Since I’m a dancer, it’s natural for me to emote physically, and I suppose I made my characters do the same. 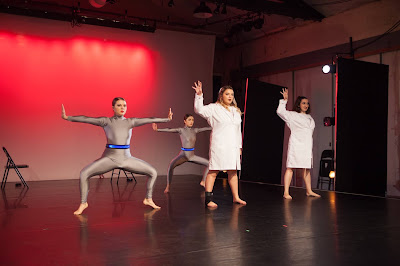 I do, and I don’t agree. I found it hard to read while working on the first draft of my manuscript, and then again while promoting it. In full transparency, I can sometimes be someone who compares myself to others, and with a genre like science fiction that has incredibly selective fans, I felt intimidated reading in my genre.

However, when I’m in idea generation phase, and not in the throws of writing or promoting, I think reading is incredibly beneficial, especially if you can use something as a blueprint for how to strengthen a short coming in your own work. One of the first books that I allowed myself to read after putting my first draft together was Neuromancer by William Gibson. A friend recommended it to me to help with how I approached the technical descriptions in my novel. In that case, it was really beneficial.

If you could meet and spend a lunch with any two individuals, the first a historical figure and the second being a fictional character: Who would they be and why?  Where would you select to dine, and what might you hope to discuss?

I think I would like to have lunch with K from Katherine Faw’s Ultraluminous and the famous burlesque dancer, Gypsy Rose Lee. I’ve done burlesque myself in the past and have lately been wanting to get back into it. I think they could give me the pep talk I need. I also think they are two free-spirited and badass women, and I can be the opposite most of the time. Hopefully they would coax some free-spiritedness out of me over some wine at a brasserie in Paris.

What do you struggle with most as a writer and how do you overcome it?

EDITING! My goodness, I am a creative writer, but I am NOT a technical writer. I think editing is the most challenging part because it's the total opposite of creative flow. You need to be attentive and incisive, and reading your own work requires this weird level of vulnerability with yourself. Emotionally, it's a really taxing process.

As far as technical editing goes, I advise new writers to invest in a good editor, if nothing else. For reading your own work, I advise red wine. 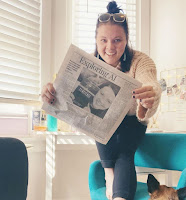 Can you share a little bit with us about your recently published work?

I wrote it for myself. As a reader, I just felt like there wasn’t much out there like it. I was the kind of kid that grew up reading The Hunger Games and The Divergent Trilogy, and when summer reading was assigned and it was Michael Crichton and Robin Cook, I tore through it.

What does the 25-year-old version of that kid read? That’s who I wrote Sentience for.

What is one of the most challenging or difficult lessons you’ve learned as an author?

As a first-time author, I learned a lot about timing, and at what point in the process things need to get done. For example, like trying to have your book converted into a MOBI file two weeks ahead of your release date is a bad idea. There are so many nuances things that can hold you up, if not done in the correct order. I would have gotten a lot more sleep, if I knew these things.

There’s so much information about what to do to self-publish, however, not very much on when things need to get done. If any new authors out there read this and have questions about the order in which I did things and what I would do differently, I encourage them to reach out. I like helping other artists and creators, and I feel like artists don’t help each other enough. 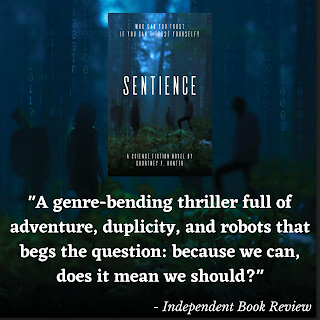 Besides reading and writing, what else occupies your time? Do those activities influence your writing?

I like creating in anyway I can. It feels good to take the things in my mind and turn them into something.

I always connect what I am making back to my writing, and in a lot of ways, creating can help me work out a story in different mediums. For example, my next novel is set in the town I grew up in, so I’ve been taking walks and playing around with taking pictures of the neighborhood.

I also want to discuss family dynamics in my novel, so I started knitting while I think about those dynamics. Something about the interconnectedness of yarn makes me think about the way family members impact one and other.

I have a sequel to Sentience in the works, but it’s on pause for right now. I need to step away from that world for a bit and let myself get lost in something new. So, I started working on a stand-alone thriller that’s got some crime and family drama worked in.

I’m also trying to get into grad school for Media Studies + Production, so that I can have the tools I need to write and make movies and documentaries. That’s the end game, fingers crossed.

As we’re coming to the end of our interview, is there anything you’d like to say or add?

You can watch the dance performance that inspired Sentience here!

Please share where readers can find you on the internet and where they might locate some of your works.

You can find Sentience on Amazon. It’s available on Kindle Unlimited.