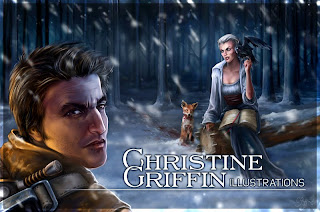 A heads-up for folks who've read Flank Hawk or have seen the cover: Artist Christine Griffin (who created the cover art for Flank Hawk) will be attending ConGlomeration (in Louisville, Kentucky) April 9th-11th.

If you're attending and get a chance, stop by Christine's table, check out her artwork and say, "Hi."
Posted by Terry W. Ervin II at 3:06 PM No comments:

Fans of Speculative Fiction will be happy to learn that Aberrant Dreams has reopened with a new website, new content and, for writers, a new submission process.
Posted by Terry W. Ervin II at 6:16 AM 2 comments: 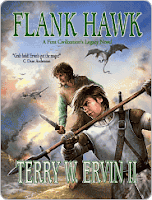 This week Barnes & Noble added the option to purchase Flank Hawk as an ebook (for $1.99) through its website. I knew that it was coming but, like many things in publishing, it too seemed to move at a glacial pace.
Flank Hawk remains available as an ebook through the Kindle and Smashwords.com, as well as in print through online venues such as Amazon.com, Barnes & Noble and through bookstores everywhere.
Posted by Terry W. Ervin II at 11:36 AM 4 comments:

I came across this video by DK of UK, and thought it was, while simple, both interesting and creative:

The Future of Publishing

Sure, in the end it's a bit of a promotional video, but still it has an interesting message contained within.
Posted by Terry W. Ervin II at 10:47 PM 3 comments:

March Madness and Lord of the Rings

I don’t follow college basketball that closely, but I’ll make my prediction that Villanova will prevail and win the NCAA Championship.

The logic? Why Bored of the Rings, of course.

For those who have not read this parody of Lord of the Rings (and if you haven’t, you’ve really missed out on something hilarious), from page 85-86:

As Goodgulf stepped onto the bridge the passage echoed with an ominous dribble, dribble, and a great crowd of narcs burst forth. In their midst was a towering dark shadow too terrible to describe. In its hand it held a huge black globe and on its chest was written in cruel runes, “Villanova.”

Goodgulf turned to face the dreaded shadow, and as he did, it slowly circled toward the bridge, bouncing the grim sphere as it came. The wizard reeled back and, clutching at the ropes, raised his wand. “Back, vile hoopster,” he cried.

At this the ballhog strode forward onto the bridge…

Below is my first article I wrote and had published. Over the years it has garnered the most comments and email questions, including another one this past week. That indicates it me it's been helpful to writers.

Dialogue is an essential part of most short stories and novels. It is always better to show or have happen than to explain or to describe. Character conversation, or dialogue, is one way to accomplish this. This article reviews some of the basic structural and punctuation issues of conventional dialogue.


2. Words spoken by a character in a story do not have to be in complete sentences.


3. People in conversations do not always speak in complete sentences or use proper grammar.


4. In a story, make sure your dialogue sounds like what a person would say in conversation.


Make sure all of your characters don’t speak the same. A disgruntled teen skateboarder should not come across the same as a senior citizen on the lamb from a nursing home.


You should identify who is doing the speaking or make it readily apparent to the reader.


If it is unclear or ambiguous who is speaking it is necessary to add who uttered the words with a dialogue tag before, in the middle of, or after each bit of dialogue.


It is not necessary to explicitly state with a dialogue tag if it is reasonable to expect the reader to know.

“Did she have to eat this stuff when she was my age?”

"Yes, Little Max. She did, just like you should.”


Try to avoid using too many descriptors (yelled, said angrily, cried out, etc.) as the context of the situation and character personality should enable the reader to interpret how something is being said. The word 'said' is almost invisible in dialogue text, while too many descriptors can be distracting.


In a paragraph where a character is identified taking action, it is not necessary to directly identify which character is speaking with a dialogue tag.


Generally speaking, each time a new character speaks it is considered a new paragraph. This assists the reader in following a switch from one character to another in a conversation.


Occasionally, a character's string of dialogue continues from one paragraph to a second. This is identified by not placing the closing quotation mark at the end of the first paragraph and by using an open quote at the beginning of the second paragraph.


Always remember to indent for each new paragraph.


Comma after dialogue tag:
John said, “I am happy.”


Comma before dialogue tag:
“I am happy,” said John.


If a dialogue tag is in the middle of a character’s statement, the first word after the tag is not capitalized unless the proper noun or personal pronoun requires it:
“Beyond that,” she said, “who knows?”


If end punctuation is an exclamation point or a question mark, the following word in the tag is still not capitalized:
“I am happy!” said John.


Note proper capitalization. If the dialogue tag follows the closed quote of the dialogue, the next word is capitalized if it is a proper noun:
“I am happy,” John said.


When using action to identify the source of dialogue, each sentence stands alone with its punctuation:
John jumped up and down three times. “I am happy!”


6. Watch comma use when adding action or information to a dialogue tag:
“I am happy,” said John, jumping up and down.


“I am happy,” said John as he jumped up and down.


Below are brief examples showing the various dialogue structures used in combination.


Her fiancé dashed to the front door. “You should’ve told me sooner.” He opened it just in time, making a mess on the front porch.


She shook her head and frowned. “I shouldn’t have to tell you such things.”


“Right,” he said and wiped his mouth on his flannel sleeve


“You bet I’m right. And you better clean off my new welcome mat.”


“What? Has your watch stopped again?”


Sally shook her wrist before examining the timepiece. “Again!” She tore it off and threw it on the floor. “This is the third time this week.”


"Don’t leave it there. Why don’t you take it back and get a refund?”


“Because, I lost the receipt.”


“You don’t always need one,” said her boyfriend after retrieving the watch from the green shag carpet.

With her left eyebrow arched, she asked, “Are you sure?”

The above guidelines and examples should enable beginning writers to successfully incorporate varied and effective dialogue into their short stories and novels. Practice using conventional structures, and an attentive eye while reading established authors, will enable dedicated writers to improve their writing by flexing their dialogue muscle beyond the basics.

“A curious blend of epic fantasy, modern techno-thriller and non-stop action-adventure, Flank Hawk is a compelling and original tale of a brave young mercenary pitched in deadly magical combat against the undead techno-armies of the Necromancer King. Whether you like swashbuckling wizardry, fierce dragon battles, modern military hardware or sword-slashing zombie mayhem, Flank Hawk has it all.”
--Erica Hayes, author of the Shadowfae Chronicles 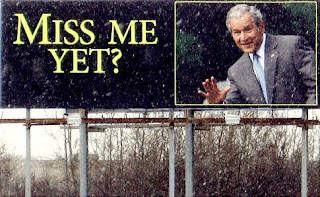 With the recent hubbub about the "Miss Me Yet?" Billboard, former VP Dick Cheney's recent minor heart attack, the Health Care Reform Summit, especially the jab to Senator McCain by President Obama about the campaign being over, it reminded me of a catchy JibJab political cartoon:
Time for Some Campaignin' (the girl poked at the end is one of my daughters)
I follow politics, and sometimes you just have to laugh. Beyond that, it's interesting to look back and see what was happening then, and the turns that have taken place since.
If nothing else, hope you enjoyed the tune--and it's not caught running again and again in your head.
Posted by Terry W. Ervin II at 5:13 AM 4 comments: