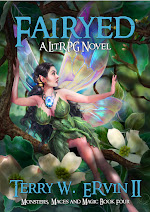 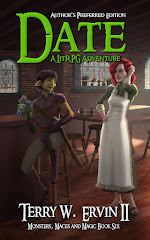 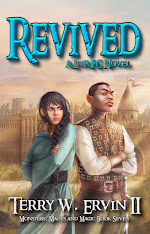 `
Welcome to Up Around the Corner, Dean. Please, tell us a little about yourself and your writing. 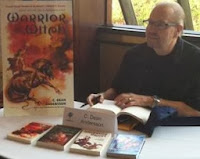 While I was in the Air Force, I got serious about my writing. I wanted to write “good science fiction like Arthur C. Clarke.” His Childhood’s End, Rendezvous with Rama, and 2001 were favorite SF novels of mine. The cosmic wonder they produced I hoped to create myself.


After my discharge, I went back to school and studied physics-astronomy to get a solid science background for writing serious SF. I wrote short stories and sent them to Analog, my favorite SF magazine. But nothing sold.


It took some good suggestions from Analog’s then editor, Ben Bova, for me to admit the problem was that I was writing from my head. My stories had no heart. So, I tried writing from my heart and, because of an Old Woman in Black from my childhood, “spooky stuff” came out that sold.


I was playing alone, as only children learn to do, outside one day, I guess I was three or four, when I saw a woman in black, dressed fancy as if for church, hat and gloves, but old fashioned, like in photos my grandparents showed. She came toward me hunched over, using a cane. A black veil hid her face. And I got scared.


No one else was in sight there on the outskirts of my small, rural Kansas town. I ran, hid, and listened for her scuffling footsteps to go on by. But instead, they stopped. I waited. The quiet continued. Finally, I looked out. No one was there.


Next time, she was sitting in a pew at church. I tried to run away but was forced to walk by her. Back home, I asked who she was. No one had seen her but me. Then my grandma remembered a widow who’d dressed that way, in mourning, before she died.


One night, after I’d started school, I dreamed I heard rustling outside my bedroom window and looked out. The Old Woman was there, unveiled and grinning. I woke up in terror. But worse, after that, usually near sunset and always when I was alone, I’d hear the rustling while awake.


I told myself it was “dogs walking in dead leaves.” But the sound came even when no dead leaves were there, and because of the dream, I was afraid to look.


The rustling continued, unpredictably, for a couple more years, until one sunset the sound came and sudden anger overrode my fear. I grabbed a baseball bat and ran outside to confront whatever it was. Nothing was there.


The sound never returned, but one night later on I awoke and saw my mother sitting in the living room, grinning in the dark. In the morning, I knew it had not been my mother. I hoped I’d been dreaming. But it felt like the Old Woman had been inside the house. After that, I never saw her again. I did, however, dedicate my novel, Fiend, to her with these words:


For the Crone of my Childhood Dreams,
At my North Window beneath the Willow,
Grinning in Moonlight with Her Hounds and Nightmares,
Feet of Bone rustling Dead Leaves in Summer
Beneath Her Cold Black Cloak,
My Thanks, and this Book.

Of course I have wondered about those strange childhood experiences. Were they caused by my strong imagination subconsciously playing with Jungian archetypes? And if so, why? Or was one or more unexplained phenomena involved? There are many reports worldwide of people awakening to see an Old Woman or “Hag” in their bedroom. But my encounters while awake  were different from those sleep-related, “Night Fear” experiences.


Whatever my Muse was, wasn’t, or still is, in retrospect I see that the consequences pervade my work, in particular with regard to strong female characters and Witches. Sometimes, I know while writing when my Muse is responsible. In Buried Screams, a rustling sound is associated with a visit from one character’s mother’s corpse. But more often, the “Old Woman” sneaks up on me to be identified later.


For example, the “Witch” themes in most of my novels were ripple effects of research into Witches begun in childhood, because I wondered for a while if the Old Woman was one. Fiend involves the immortal Witch Medea visiting a Dallas comic book convention. And my Medea is still, as in the classic myths, a Priestess of the Goddess Hecate, one of Whose triple aspects is the “Crone” or Old Woman.


Both I Am Dracula and I Am Frankenstein have a Witch who voluntarily becomes a Vampire to initiate Dracula into Vampiredom. Tzigane is a strong, heroic character who becomes Dracula’s lover. When Satan betrays them and transports Tzigane to Hell, so great is Dracula’s love for her that he fights both Satan and God to get her back.


Raw Pain Max came from discovering the historical Blood Countess, Erzebet Bathory, in a book called Witchcraft by William Seabrook when I was a child. Much later, as a horror writer I wondered what would happen if a modern woman who was into fantasies about Bondage and S&M, and wondered why, discovered she was the reincarnation of Erzebet, whose legend says she tortured young women and bathed in their blood.


Torture Tomb’s Witch-theme was driven by research into the Wiccan religion and studying history’s Witchcraft persecutions. In TT, modern Wiccans or “Witches” are the heroes, but reviewers almost always ignore that aspect to focus on the book’s explicit descriptions of the historically accurate tortures of the misogynistic “Holy” Inquisition. Showing in-your-face-so-you-can’t-keep-ignoring-it historical violence against women was, however, the point. The Old Woman in Black hates hypocrisy and takes no prisoners.


The Bloodsong Saga, on the other hand,  grew from my Scandinavian roots. Dad hailed from Sweden. Bloodsong is a kick-ass woman warrior/werebeast fighting to save her daughter and folk from sorcerers, death slaves, and other dark delights. But at the saga’s heart, disguised as Hel, Norse Goddess of the Forgotten Dead, is my Old Woman in Black.


Hel also appears in the short story that sent me to the Bram Stoker Award finals, “The Death Wagon Rolls on By.” And a character with Scandinavian heritage in Buried Screams talks of “Old Hel.”


That’s an interesting overview and quite a career this far!

Can you tell us a little more about how you came to re-release your Bloodsong Saga and why you originally published it under a pen name?


Tight deadlines hurried the writing of Bloodsong’s saga. Converting the trilogy to the new HEL X 3 eBook gave me a chance to revise and expand the novels, even add chapters. To me, the trilogy was always one story in three parts, so it’s good to have it whole in HEL X 3, which I therefore consider the saga’s definitive edition.


By the way, I only recently realized that because Bloodsong’s daughter is 6 in Warrior Witch of Hel, 13 in Death Riders of Hel, and 15 in Werebeasts of He, the saga spans 9 years. The number 9 is a sacred number in Norse lore. Writers often write things that mean more than they realized.


About the pen name—nothing mysterious. Two previous dark fantasy novels had been written under the pen name of “Asa Drake,” Crimson Kisses and The Lair of Ancient Dreams. The publisher of the saga insisted we continue using that name. I changed it to my real name, later, and am, of course, using my own name for HEL X 3.


In your writing career thus far, you must have met some really memorable people (authors, editors, fans, etc.). Could you relate to us one or two of those experiences? Is there anybody today that you’d really enjoy crossing paths with?


Because of Bloodsong, Quorthon, founder of Bathory, the Swedish rock group that invented Viking Metal dedicated a song on Hammerheart to me, “One Rode to Asa Bay.” I was and remain honored. “Asa Bay” turned out to be Bathory’s only music video, because Valhalla needed Quorthon and took him early. But his epic music and video are immortal. Check them out on the Internet, and forever, “Hail the Bathory Hordes!”


My writing also connected me with one of my favorite artists, Boris Vallejo. A trailblazer, he painted my strong warrior woman using a body builder as the model before it was fashionable for women to show muscles. He even called me while painting Bloodsong to get things right. The Boris cover for HEL X 3 shows Bloodsong and Guthrun, her daughter, fighting enemies together. The beauty of strength, that’s Boris.


And Bloodsong also put me on a World SF Con panel with a childhood writer-hero, Poul Anderson. His Norse Fantasy work, especially The Broken Sword, Hrolf Kraki’s Saga, and to me his masterpiece, War of the Gods, are inspired. What a thrill it was to meet him. Thank you, Bloodsong!
I even managed to correspond with the writer who made me want to write “good science fiction,” Arthur C. Clarke, before he died. Raw Pain Max has characters that listen to the original satellite radio station with an all metal format, Z-ROCK. Since I knew Clarke was credited with “inventing” the concept of communication satellites, I sent a newspaper article to him about the first Satellite Music Network. He responded, saying he’d wondered when satellites would be exploited for entertainment purposes and thanked me for letting him know.


But the person I would still like to meet? Maybe the one I’d most like to meet, face to face, is not even a person. Of course I mean my Old Woman in Black. Or maybe I’ve already met her, by writing the “spooky stories” she inspired.


Do you have any advice for writers trying to break in or early in their career?


Write from the heart, and write because you want to write, not because you want to be seen as having written. And become a merciless self-editor. Elmore Leonard said if your writing sounds like writing, rewrite it. If that sounds mysterious, read some Leonard. He practiced what he preached. The way he handled dialogue and characterization is amazing. Also, if at some point your work is not condemned by a critic whose opinion you are supposed to respect, work harder.


Can you share with us what we might expect to see from you in the near future?


A new Bloodsong novel, Valkyries of Hel, eBooks of my other novels, and the continuing adventures of Dracula and Tzigane, but also, I can feel a new horror novel rustling closer in my subconscious. Maybe I’ll call it, The Rustling. Has that been used? It could start with a writer hearing rustling at his window like that which scared him when he was a kid, but this time he looks and sees his Old Friend in Black, to whom he says, “So! What’re we gonna write next?” And off we go. Always listen to your Muse.


Sounds great, Dean. Thanks for taking the time to participate in this interview!


Where you can find out more about C. Dean Andersson and his works: